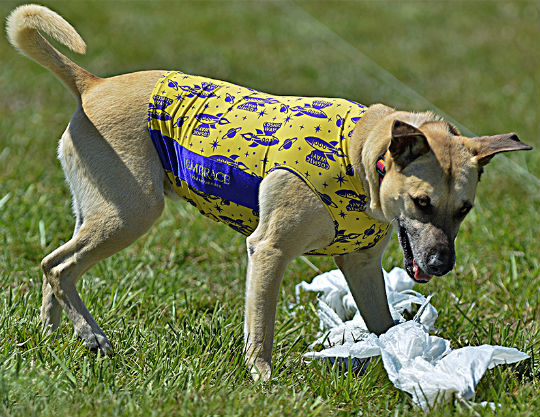 Kai, a 5 year-old Catahoula Leopard dog mix, loves lure coursing. There is no other way the rescue dog would rather spend his time than chasing the lure around the field. His great skill at the sport had earned him four AKC Coursing Ability Excellent (CAX) titles, making him the most titled All-American Dog in the sport.

So when Kai started limping after a competition, Stephanie thought he was just tired or might have strained a muscle or ligament.

The next day Kai was at his veterinarian’s office for diagnosis and treatment. X-rays confirmed cranial cruciate ligament disease. His limping was not the result of trauma but a disease.

Kai was referred to a surgeon that specialized in his condition. The doctor confirmed both knees needed treatment so a staggered surgery plan was necessary. The left knee was operated on in November 2015 and the right knee in December 2015. Both surgeries went well, and Kai entered a strict rehabilitation program geared to getting him back to competition.

He began pulling low weights in the yard, swimming in a heated pool, and walking on a doggy treadmill. After months of rehab, Kai made his return to AKC Coursing Ability Tests.

“After missing the fall and winter running seasons, we all watched very nervously as he returned to running in Coursing Ability Tests this month. But his knees look stronger and better than ever; we are so happy to be back on the bunny trail!”

Kai earned the CAX5 on April 16t, 2016, at the Langley Kennel Club test in West Point, VA, continuing his reign as the top mixed-breed dog in AKC Coursing Ability.

Kai competes through the AKC Canine Partners program for all dogs, including mixed-breeds and rescues.