Memorial to Abandoned Dog Who Spread Kindness and Compassion 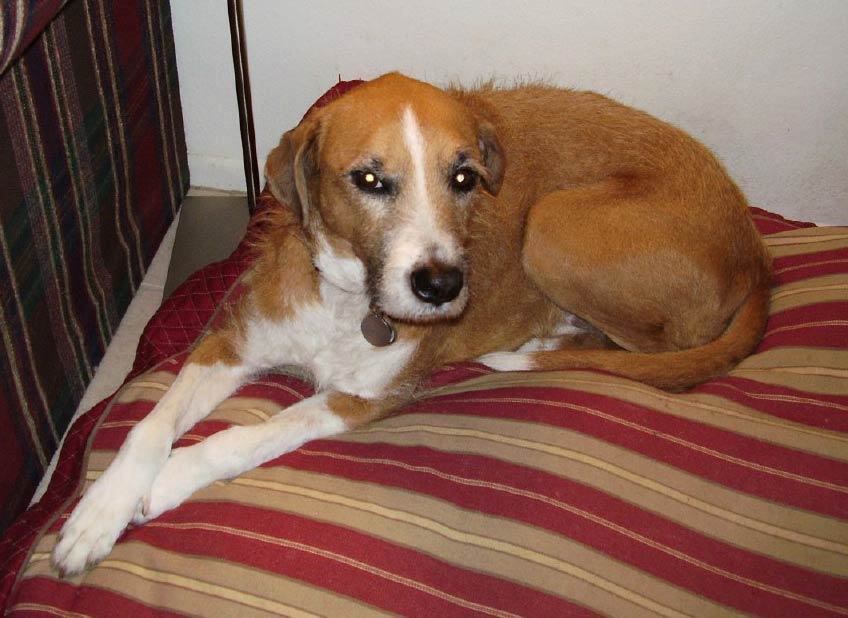 This is a special story about an incredible therapy dog. Luke passed way in January 2010 at about 14 years of age, but the impact he made on many children continues to last. His owner Debra White shares their story. To protect privacy, Debra has changed the names. This story originally appeared in an issue of the AKC Canine Partners News newsletter.

Homeless children circled around me and stroked my adopted dog Luke.

“Can I feed him?” a blond girl with pig-tails asked as she giggled when Luke tried to kiss her cheek.

“When does he sleep?” the girl’s older brother asked.

“Does Luke watch the Animal Planet?” another boy asked.

That began my seven year journey with Gabriel’s Angels, a group dedicated to freeing Arizona’s abused, at risk and abandoned children from the shackles of violence through healing pet therapy.

On a scorching summer day in 2001, I stopped at the Bone Appetit dog bakery to buy snacks for my old scraggly hounds. I was a shelter volunteer, and a steady stream of decrepit dogs found refuge in my house. Tasty treats perked them up. At the check-out counter, a newspaper clipping about a doggie beach party caught my eye. What the heck was this? We’re surrounded by the sprawling Sonoran desert.

“Who had the beach party?” I asked, paying for a bag of “pupcakes.”

Volunteers had spent all morning filling up kiddie pools and opening up beach umbrellas. Real sand scattered around the parking lot hinted at an ocean feeling.

As I left, I grabbed the business card for Gabriel’s Angels founder Pam Gaber.

Dogs had been instrumental in my recovery from a traumatic brain injury, the result of a serious pedestrian car accident. Pet therapy became one of my goals. In 1999 I adopted Luke, whose mellow manners and gentle touch convinced me he’d be an ideal therapy dog. Several months later, he sailed through his behavior test, and we joined the Companion Animal Association of Arizona. Every Friday morning, we brought smiles to seniors in a rehabilitation center.

I met Gaber for coffee and she sold me on Gabriel’s Angels. Luke and I would spread kindness and compassion to heal abused, neglected and at-risk children. The accident left me with disabling injuries so I no longer worked. My schedule allowed another weekly visit, and Luke was perky enough to handle another facility.

A wheelchair bound boy named Ronnie, perhaps 9 years old, grabbed my attention on my first day at the homeless shelter. Workers said he couldn’t talk. His movements were spastic. I assumed cerebral palsy. Ronnie grinned when he rolled into the youth center and always tried to pet Luke. I guided his hand along Luke’s curly fur. In spite of staff’s assurance that Ronnie couldn’t talk, I heard words like “Luke” and “the dog.”

Ronnie wasn’t there on one visit. So I asked Vaughn, the staff worker, about his absence.

Vaughn frowned. “Ronnie doesn’t have CP. His mother’s boyfriend beat him up when he was a baby.”

Tears swelled in my eyes. “How could he?”

“Evidently lover boy got enraged when Ronnie cried, and he kicked him around. Ronnie was hurt very badly. He’ll be in that chair for life. I’m not sure where he is today.”

Memory loss is one of the residual effects from my brain injury but I’ll never forget Ronnie, the affable, sandy-haired boy in the wheelchair who smiled every time he saw Luke.

I entered the youth center with Luke. Ruth, a girl perhaps 12 years old, flew out of her seat and hugged my dog. “A dog – it’s really a dog. I’m so happy,” she said.

Luke returned the affection with generous slobber to the girl’s cheek.

“Hi Ruth, I’m Debbie. This is Luke. And we visit on Tuesday afternoon,” I said.

“Sure, Luke likes everyone,” I replied.

Through bits and pieces of our interactions, Ruth’s damaged psyche became apparent. Her easy-going behavior suddenly turned ugly. The other children avoided her, sometimes even mocked her. I wasn’t trained in child psychology but I managed to hold the group together when Ruth acted out. The children didn’t understand her emotional anguish. Imprisoned for child abuse, Mom also killed the family dog. Ruth received psychotherapy but the scars penetrated deep into her soul. Luke helped her heal if only for a short time each week. She often asked if Luke could spend the night. For the three months her family lived at the shelter we brought a small shred of comfort to a bruised and battered young girl who I hoped was on the road to recovery.

Gabriel’s Angels handed out stethoscopes to all volunteers, compliments of a generous donor. We invited children to listen to the dog’s beating heart.

“He feels pain like you do,” I said, watching children line up for a chance to listen. “If someone hits Luke, he hurt, just like you hurt if you’re beaten.”

“All violence is bad,” I said.

I brought the stethoscope every few weeks. Some children lived at the shelter for the maximum four-month stay so I didn’t want their attention to fade with the same activity. I mixed up activities that taught empathy and kindness. The stethoscope, however, was always popular.

Teaching compassion extended beyond animals. A brawl erupted between two pig-tailed third graders while the other children assembled a jigsaw puzzle. I separated the kids and said, “Ladies, please stop fighting. Tell me what all this is about.”

“She said my mother was a pig,” Veronica said jabbing her finger at Tracy.

“Did not,” Tracy said, as she lunged at Veronica’s throat.

I pressed myself in between the feuding girls.

“No screaming or hitting. I want someone to apologize.”

Faces gnarled, the two girls wrapped their arms around their bony chests and huffed.

There was nothing but silence so I picked up Luke’s leash and headed towards the door.

“Yes, we’re going home,” I said. “Luke doesn’t like it when you children fuss and fight.”

Veronica and Tracy quickly made up. Although I earned a master’s in social work, I lacked training in early childhood development. I wasn’t sure what to do but my idea seemed to work, at least for the moment. Children gathered around the table, and we finished the jigsaw puzzle.

A brother and sister from Detroit adored Luke. They missed their dog left behind when the family unit crumbled. Dad failed to keep up child support payments after a bitter divorce. Mom lost her factory job, and foreclosure took away their home. The dog went to a neighbor, and the family hoped for a new life in Phoenix. Mom, however, couldn’t land a job, and without Dad’s help, they ended up in the shelter.

One afternoon we discussed grooming dogs and cats, and the kids told me a story.

“Mommy was driving home from Auntie’s house,” Shawn said. “She saw a man beat his dog.”

Mom pulled over and asked the man to end the brutality. He did.

“Mommy told him she would take the dog until he could treat him better,” Shawn said. “That’s how we got Brownie.”

Not only did this courageous woman save a dog from brutality but she taught her children a vital lesson about respect and kindness. They learned that it was OK for an adult to intervene when a helpless animal was threatened.

“You’re too young to stop animal abuse on your own”, I said, “but ask a responsible adult you know or an agency to help.” Empowering children was always important.

At the end of 2008, Luke and I retired as a therapy team. During sessions, kids had started asking me, “Why does Luke sleep so much?” One boy laughed at Luke’s snoring.

Age crept up on Luke. My dog had to be at least 12 years old. His spirits were as sunny as ever but he had slowed down. He showed more interest in curling up for a good snooze than interacting with the kids. I called Pam Gaber and said we’re retiring. Luke’s not into it anymore. She said she understood.

Seven years as a pet therapist with Gabriel’s Angels changed my life. I experienced the hardships of homelessness and how they ruptured family ties. I sensed the children’s pain as they talked of loss. Homelessness involves leaving behind good friends, familiar neighborhoods, beloved pets, and comfortable schools. Living in a shelter among strangers can be scary. Talk of family violence unsettled me. I taught children negotiating skills to get along in the world without whacking someone. I hope they listened.

Luke cuddled with them. He kissed a few cheeks. He rested his paw on kids who sat alone. We cared, we loved and we extended ourselves to make a difference to children who needed us. I hope their world is better because we were there.

Rescue dogs and mixed-breed dogs are eligible for the AKC Therapy Dog title program through the AKC Canine Partners program for all dogs. For information, look