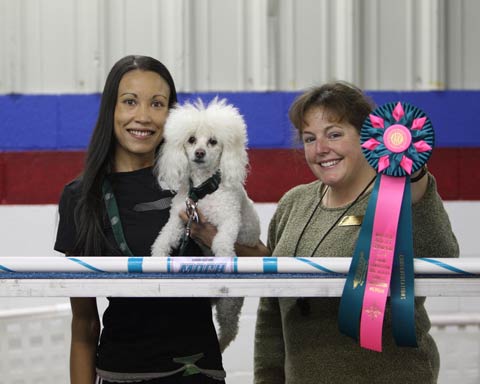 What made the feat even more impressive is that Prince is the first dog that Tacarra has owned, and she had never heard of agility until she viewed a competition on television.

“As soon as I saw it, I knew that this is what Prince Doggie was meant for.  He was so rambunctious and would often make up his own little obstacle courses around the house…I thought he would eventually hurt himself,” she said. “Agility seemed like the perfect activity for Prince to be able to use all of the energy he had, but in a more controlled and safe way.”

In addition to being an agility dog, Prince Doggie is also a certified therapy dog. He provides pet-assisted therapy to patients in hospitals, nursing homes and assisted living facilities around the metro-Detroit area.

Today, Prince Doggie is a MACH7 and maintains his status as a top titled All-American agility dog.