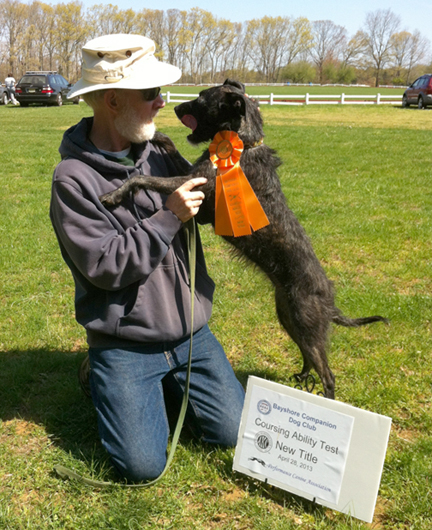 Her owners, Steve & Anne Hahn of Towson, MD, say they are very proud of their rescue girl’s achievements! Steve tells the story of how she switched from obedience dog to coursing dog:

Sasi won her AKC Utility Dog title in Obedience in November 2012, at age 2 ½ years.  “Her heritage was a mystery to us, but along the way, several people told us that in the ring she moved and looked like a miniature Scottish Deerhound,” Steve said. “One suggested we try lure coursing, so a couple of weeks after Sasi got her UD we took her to a nearby Borzoi breeder’s place to participate in an all-breed lure-coursing practice.

“Still very much in obedience mode, I asked a Greyhound owner how to train dogs to chase.  He laughed and said, ‘Man, you can’t train a hound to chase.  Either they run or they don’t.’ At the starting line, she sat between my legs unconcerned, looking around at the scenery and the other dogs lining the course.  I decided I would point to the lure when it moved and whisper ‘Get it!’  But the instant the lure took off, before I could make a squeak, Sasi morphed into ‘Siegfried the Sighthound’ and shot off with the speed and the double-suspension gallop of a Whippet, keening a high, unearthly yip that I had never heard.”

“Doing everything she could to catch the ‘rabbit,’ she covered the course in about 35 seconds, and at the end she ripped the lure off the line and shook it to death.” Sasi earned the CAX at the Staten Island Kennel Club’s CAT trial in Colt’s Neck, NJ, on Oct.19, 2013.