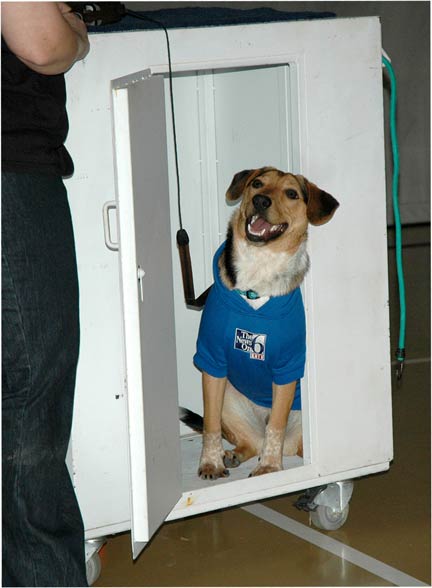 Then a hero, clad in a life jacket, appears, rips open the car door and — licks the driver all over his face as the crowd goes wild.

Meet Radar the Weather Dog, star of Tray’s Wild Weather Camp – a fun show with a very serious message – teaching children how to be safe in weather-related emergencies.

Radar displays many talents to the students’ delight, in addition to saving the child driving the toy car in the flood scene. He rushes into a safe room and slams the door when the audience shouts “Tornado!” and barks in perfect time to the song “Who Let the Dogs Out?,” to name just a couple of his crowd-pleasing scenes.

Chief Meteorologist Travis Meyer of KOTV News on 6 in Tulsa, OK, developed the free program for children in pre-kindergarten through sixth grade. Adding a dog to the show was a way to make the topic less scary for the children.

“Oklahoma has been ground zero for a number of devastating tornadoes as well as many other types of severe weather. It can be incredibly frightening for children,” said Joanna Shelton, statewide director of marketing for Griffin Communications, which owns the television station.

“News on 6 wanted to help area kids learn about severe weather safety in a fun, non-threatening way,” Shelton said. “A dog was a natural choice to be part of that outreach.”

Radar has become an integral part of the show that strives to save lives in Eastern Oklahoma. But the show also saved Radar.

Five years ago, the Beagle mix was a stray puppy picked up by animal control officers and deposited in the Tulsa animal shelter. Around the same time, the television crew went on a talent search for the canine star for Wild Weather Camp and their first stop was the city shelter.

Joanna enlisted the help of her sister, Tulsa dog trainer Susanne Shelton, to select and train the best canine candidate. It was a difficult position to fill, Susanne said, as the dog had to be extremely stable – not afraid of noises or flashing lights – as well as very kid-friendly. There also was a physical requirement as they favored a medium size dog that would be sturdy enough for the job, but not so big as to intimidate children.

The Wild Weather Camp includes many components that would scare even the most stable of dogs.  The fast-moving production includes loud music, flashing lights, spot lights, sound effects, tornado sounds and warning tones, a leaf blower (that simulates wind for an experiment), hundreds of cheering children, and a van de Graaf generator that generates static electricity for a lightning experiment.

“It was of vital importance to select a dog who was insensitive to such crazy, loud, and ever changing environmental factors,” Susanne said.

“Radar passed all tests with flying colors. We tested him at the shelter, observed his behavior in the loud hectic kennel, on different surfaces, and at different heights, none of these things phased Radar at all,” Susanne said. “Radar also loved people and had a very high interest in interacting with children and adults.”

They went on to test nearly 100 dogs, but kept coming back to Radar.

“Radar was the only candidate that fit! I think I could have tested a thousand dogs and not found another dog so wonderful and perfect for the task at hand.  And, of course, it helped that Radar was exceptionally photogenic.”

But the strenuous audition was just the start. Susanne adopted Radar and he came home with her where recovery and training began. Radar had bronchitis, which had developed from a bout of kennel cough, and also suffered from several infections.

“I remember him lying in my lap for hours, bundled up in a blanket, resting and recovering.   This actually led to his first nickname, The Burrito.”

After about a month, Radar’s health improved and he could start training. Radar had many excellent skills for a street dog, but he had no household manners or basic obedience skills so that is where Susanne started.

“Radar would resource guard his food from my other dogs; he would also run away if you reached for him. He was not crate trained or house trained. He was terrified of riding in the car (it’s likely his first experience in a vehicle was being collected and transported by animal control), and was an expert at getting under any fence. Oh, he was also an expert at tipping over and breaking into any type of trash can!”

But Radar was very smart, willing to please, and food motivated. Susanne is a positive reinforcement clicker trainer, and Radar responded quickly to this motivational method. Once he was minding his manners, most of the time, and knew sit, down, stay, come and how to walk on a leash, the more technical training started.

“There is TONS of training needed for Tray’s Wild Weather Show and most of this training isn’t really obvious or easily considered as tricks,” Susanne said. “We had to teach Radar to jump onto his performance table first and to always go to his table if he (for some reason) didn’t know what to do or something unexpected happened, and then to lie down quietly for those parts of the show that don’t involve him. This took lots of patience, because Radar is total ham and is pretty sure the entire show is about him!”

Today, Radar can do a down-stay on his table for up to 45 minutes. But when called on, he snaps to attention and starts acting. Travis often holds conversations with Radar and asks him questions to which Radar responds by barking.

“We taught him to look at whoever I am looking at and to bark his ‘answers’ whenever I crinkle my nose a tiny bit. So when I’m looking at Radar he is quiet. When I look at Travis, Radar looks at Travis and barks his answers as I crinkle my nose. Of course, being a total hambone, Radar adds his own flourishes to every conversation; he’s very creative!”

At the show’s end, Radar’s work is not finished. All the children get in line to meet Radar and this can take 30 minutes or more. “Radar greets each child as if he or she was the first and most wonderful child he has ever met.  He truly is a special dog.”

During winter and spring, Radar works at two to four weather camps a week. In his off-seasons, he often appears at public events for his former shelter, City of Tulsa Humane, to promote adoptions and makes guest appearances on News on 6 broadcasts.

At home with Susanne, Radar likes typical dog stuff. He plays with his best friend, Toni the Poodle; he chases squirrels, digs up moles, and barks at armadillos that wander into the yard.

But Radar’s favorite hobby, by far, is eating; “eating meals, treats, worms (sun dried are his favorites), also bones, rawhides, hoofs and anything else. Starting last year, Radar has been on a diet,” Susanne added with a laugh.

Radar is a recipient of an honorable mention honor in the AKC Humane Fund Awards for Canine Excellence (ACE) for his work in an educational program that educates children about weather disasters. Mixed-breed dogs, like Radar, can join the American Kennel Club through the AKC Canine Partners program and participate in AKC sports and activities.

See a clip of Radar making just his third appearance at weather camp shortly after he started his career: