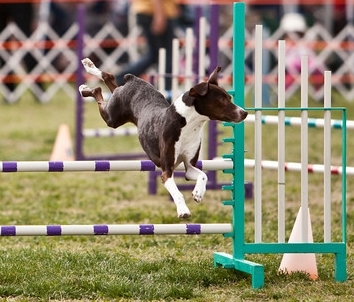 Harley was one of the first mixed-breeds in the country to earn the AKC Master Agility Championship and moved to the Preferred Agility class, which allows dogs to jump a height division lower, after he finished his fourth MACH in November 2013. He finished his Preferred Agility Championship after 10 weekends of competition on April 27, 2014, at nearly 12 years of age!

Cheryl says of Harley:  “Harley is an Italian Greyhound/Rat Terrier mix who I found on PetFinder.com in 2004. We got started in agility after I saw an agility event on TV and thought that it looked like fun. In 2006, we started training and participated in only two trials a year until we were eligible to enter AKC events in 2010. “

Since that time, Harley not only earned multiple AKC championships but qualified for and competed in AKC National Agility Championships.