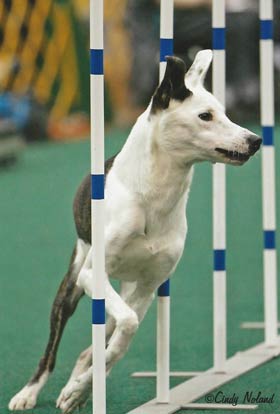 MACH Turbo MXB MJS had a rough start in life, but thanks to his adopter Rita Drewry of Lebanon, OH, he loves life now and is an AKC agility champion!

Turbo was rescued from an abusive home when he was 6 months old and taken to the Clark County Shelter in Springfield, OH.  He went through a prison dog training program at the Allen Correctional Institute to better prepare him for adoption.  He was adopted once but was returned.

The shelter felt he was a great dog for someone and sent him back to the prison program to buy him more time. Again no one was considering him and after 6 months in the shelter, euthanasia was the next step. But the shelter veterinarian took him home with hopes of finding him a forever home.

“I saw pictures of him on line and there was just something about him that told me I needed to at least go meet him” Rita said. “The minute I met him, I knew he was meant to be in my life. I have taught, trained, and shown agility for more than 10 years and he seemed to have a lot of potential.  He learned so quickly and has been very successful.”