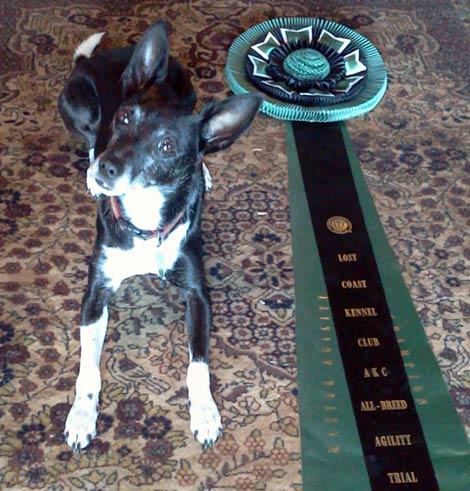 Pepsi was in an animal shelter where Mette Bryans of Eureka, CA, volunteered to temperament test dogs.

“Pepsi put up with everything on the temperament test, but it was with an expression that clearly said, ‘You are pushing my buttons.’  As I  finished making notes, Pepsi jumped on the desk and stood on my paper. How could I resist? I took her home,” Mette said. “Here she continued to impress me by leaping from the floor to the back of the sofa, and, flying through the air, snatching a piece of salami off my cracker. I never felt a thing, but the salami was gone as Pepsi hit the floor.”

When Pepsi started competing in agility, she would rip around the course with speed and accuracy and then disappear in the direction of the nearest garbage can.

“I had to go and fetch her from a dumpster in the parking lot more than once. Luckily we got past that, and she is now happy to finish courses and wait for me to put on the leash before leaving the ring,”