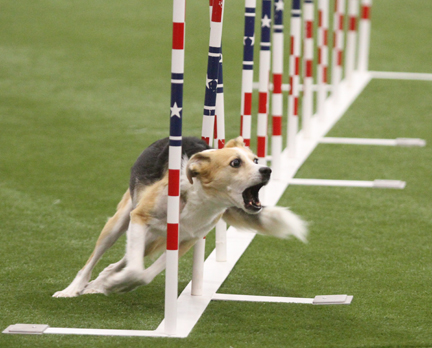 Maeby was abandoned as an 8-week-old puppy in a Wal-Mart parking lot in Missouri.

“Fortunately for both of us, my friends discovered her among the cars, and Maeby eventually ended up at home with me,” said Maeby’s owner, Beth Ostrander, of Wildwood, MO. “After a little bit of exposure to agility in a puppy class, I decided to pursue agility for fun. Maeby quickly took to the game and would voice her enthusiasm by barking continuously throughout a course.  I could not have asked for a better teammate.”

The pair began competing when the AKC began the Canine Partners program and were able to attend two AKC Agility National Championships, as well as earning the Master Agility Championship – AKC’s highest honor in Agility.

Unfortunately, due to developing back issues, Maeby was retired from agility at age 6 years (in 2013) to prevent any worsening of her condition.