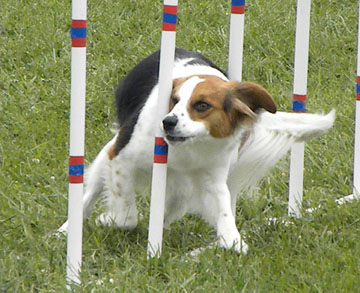 Karen adopted Annie from a shelter back in summer 2007 when it was estimated that Annie was about six months old.  A spaniel-Beagle mixed, dubbed a “Speagle” by Karen, Annie was a natural for agility.

“We became involved in agility back in the fall of 2000 when we found our first ‘Speagle’ type rescue. Sadie had separation anxiety and so we took an eight-week class agility class to help her build confidence.  Fourteen years later, we still love the sport.”

Sadie competed in non-AKC venues because the AKC Canine Partners program had not started yet. But when AKC launched the program for mixed-breeds in 2010, Annie was ready.

“When AKC welcomed mixes to compete, we were very excited.  Sadie was near the end of her career, but Annie was just beginning hers and I decided to pursue a Master Agility Championship (MACH) to honor Sadie.”

Annie achieved the highest honor in AKC agility on Feb. 28, 2014, at their hometown trial hosted by Greater Lafayette Kennel Club.

“I am always amazed at Annie’s intelligence, drive and work ethic.  Every time I step to the line with her, I feel so blessed to have her in my life.  While we are sorry she had a rough start in life, we are thankful that this little rescue decided to ‘adopt’ us!”

For information on making your dog part of the AKC Canine Partners community and getting involved in AKC Agility and other fun sports click, here.