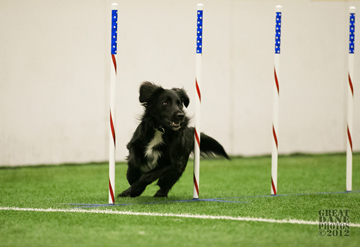 Elphie is a 3-year-old Golden Retriever/Border Collie mix who Ann first encountered as a 5-week-old puppy. Ann said she immediately noticed that Elphie was special and reluctantly decided the puppy had to join her family.

“For eight years I had been running a Golden Retriever, struggling to get his Master titles and though he loved spending the day with me, it was apparent that agility was not his forte. After seeing the skills and potential Elphie possessed, my intention was for her to get into the sport my Golden never excelled at,” she said. “Once old enough to begin training, Elphie not only showed interest in agility, but succeeded way beyond my expectation.”

“As we progressed, Elphie became more confident and her speed increased rapidly. Being unaccustomed to running a fast dog, I had to change my technique and handling skills to exhibit her potential,” Ann said. “We have finally come together and bonded as a team, and I am so grateful to have her as a partner. She has not only revived my love for agility, but shown me how much fun you can have conquering a course with your best friend.”

Elphie earned the highest honor in AKC Agility – the Master Agility Championship (MACH) on Dec. 27, 2014, at a trial held by Doberman Pinscher Club of Greater Milwaukee.

Elphie competes in AKC Agility through the AKC Canine Partners program for all dogs, including mixed-breeds and rescues.