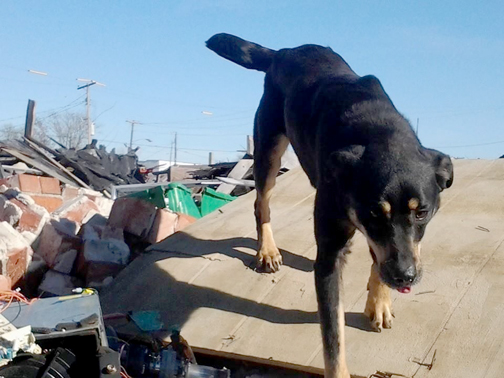 Read on to meet an All-American Dog and his handler who work with the Jefferson County (KY) Search Dog Association and have earned the AKC Search and Rescue Wilderness designation:

“When I walked in I noticed a very active shepherd terrier mix, and we played for a while…About 4 weeks later, I was in the area again and when I walked in, I heard Rex barking for me. I filled the adoption paperwork out then and there. I was told that they would have to check my references, and it might take a day or two so I went on and went shopping. I hadn’t been gone an hour when I received the call to come pick him up. We bonded quickly and became the best of friends.”

Sometime later, Gary heard about a public dog event in Louisville, KY, and he and four friends loaded up their dogs and headed out. At the event, Gary saw a booth for the Jefferson County (KY) Search Dog Association (JCDSA).

“We spent the rest of the day at their booth talking, finding out what we needed to do in order to join.” Three weeks later, Gary and Rex became part of the team.

“Rex took to searching real quick. He has two speeds: fast and faster. His favorite reward is always a good belly rub, but he loves playing catch with his ball also.”

For one of his final tests, Rex had to conduct a night search for a person over 20 acres. He achieved this in about 20 minutes.

“The subject had gotten a ride on a four-wheeler to the back fence. She went through the fence and laid down under a bush,  and oh, did I mention that she was in a sleeping bag, zipped up, with just a hole big enough to breathe out of, and the field had grass about a foot high. He did great!”

Rex and Gary have been with JCSDA for three years.

“We have made several searches and he is always ready to go. He loves finding people,” he said. “A lot of people think I rescued him but in reality, I was going through some tough times and he rescued me.”

The AKC honors qualifying Search and Rescue dogs with the AKC Search & Rescue (SAR) titles. To qualify for the SAR title, dogs must have been deployed on at least five missions and certified by an AKC-recognized SAR organization. In addition, AKC also offers a SAR Urban title for dogs that are FEMA or State Urban SAR certified. Get more information on the AKC titling program.