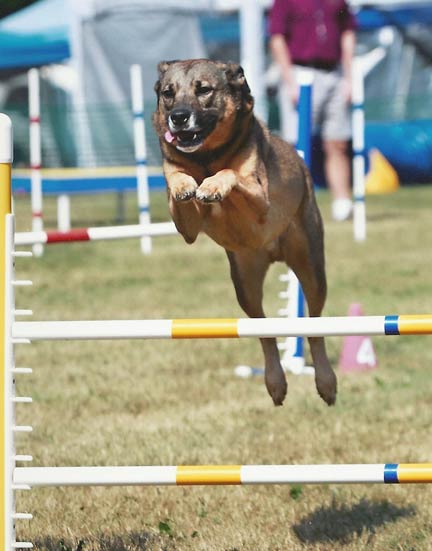 Peanut, known formally as PACH Peanut Bee RN AX AXJ MXP4 MXPB MJP7 MJPS PAX, started life as an abandoned puppy and had many fears as a result. But thanks to the love and support of his adopter, Erin Tolchin of Fayetteville, NY, he has conquered his fears and earned an AKC Agility championship and a rally title – and loves to meet people and go on hikes.

Erin adopted Peanut when he was 6 months old after she fell in love with his picture on Petfinders.

“Someone had tied him to a tree in a city park and abandoned him.  When he was picked up by animal control, he was malnourished and in poor condition,” Erin said. “He spent the next four weeks at a veterinary hospital. When he was ready for adoption, he came home with me on Aug. 8, 2008.”

Initially Peanut was fearful of people and other dogs but once his confidence grew, he blossomed into a happy, cheerful dog that loves everyone. He now competes in agility, obedience, and rally and loves to hike and swim.