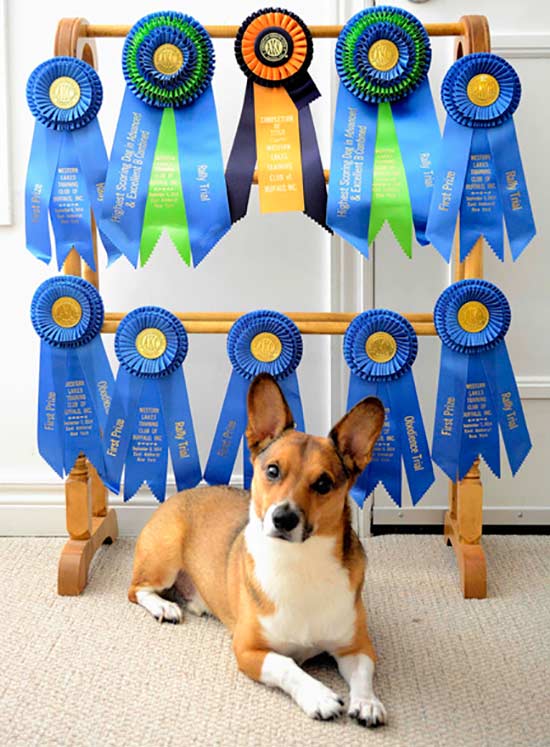 JD is a 5 year old Jack Russell and Corgi cross who was born in Lynchburg, TN, just down the road from the Jack Daniels distillery.

“He is a fantastic competitor, and one of his favorite words is practice,” says his owner and trainer Alison Smith of East York, Ontario, Canada.

At the age of 2, JD had a setback in training when he underwent surgery on all but three discs in his back and neck to treat spinal disc disease. Since making a full recovery, JD has gone on to earn numerous titles, both north and south of the border.

He earned his the highest level of AKC Rally title – the Rally Advanced Excellent (RAE) – in just four weekends. He completed the title on Sept. 6, 2014, at the Western Lakes Training Club show in Buffalo, NY, finishing the weekend with five perfect scores and first place finishes in the Rally ring, two High Combined Rally wins, and two wins in the Obedience ring in Graduate Open. He finished fourth in the Excellent division at the 2014 AKC Rally National Championship in Harrisburg, PA, and placed 11th out of 400-plus dogs in the RAE class at the 2015 AKC Rally National Championship.

“I knew right from the first time he stepped in the ring that he was something special,” Alison said. “He continues to amaze me with his accomplishments and I feel very lucky to have him in my life.”

When not practicing or competing, JD is most likely to be found chasing his ball.