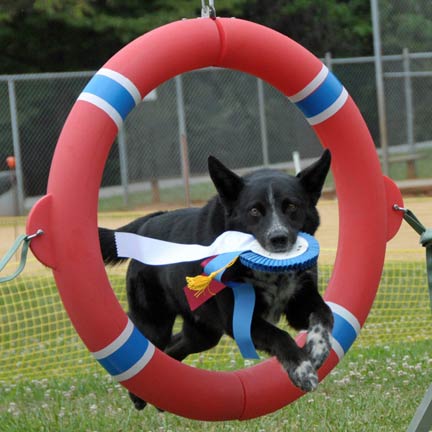 Smarty is a rescue dog who was turned in to a shelter after showing up at a factory every day for several weeks to share the workers’ lunch.

“That’s why we call him a  professional beggar – because he made his living at it for a while,” his owner Sheila Booth of Free Union, Va., said. Smarty spent a year in two foster homes before Sheila adopted him.

“Smarty was obviously a farm dog.  He prefers to be outside in one of his numerous dirt holes under the porch. And he lives to chase – tractors, wildlife, etc., but he is now restricted to chasing from inside his fenced yard.”

When Sheila asked the rescue staff why they named him Smarty, they replied “Because if you ask him to do something,  he just does it.”

“They were so right…He figures everything out right away and will work forever at the prospect of food.  Smarty does agility runs for bacon – one of his favorite foods.”

Smarty finished his PACH on June 29, 2014, at the Dog Owners Training Club of Lynchburg (VA) trial and also qualified for the 2014 AKC National Agility Championship where he qualified in every run and finished 13th out of 60 dogs in his division.

“But most of all, he is the best companion farm dog a body could ever want,” Sheila said.