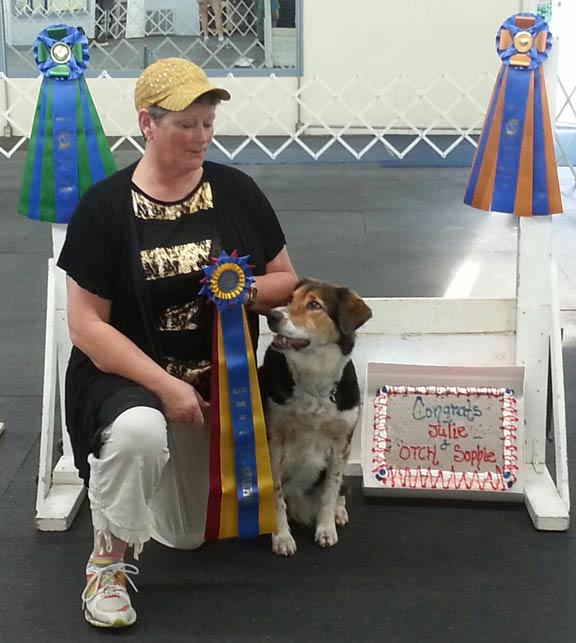 All the dogs in the shelter clamored to be seen – barking and jumping against their kennel doors.

But Julie Kirkland kept coming back to the dog that seemed more interested in watching than getting attention.

“As my husband and I were walking through the facility looking at the adoptable dogs, we walked past one that was sitting quite prim and tight, with bright smart eyes, not barking or jumping. We kept going and looked at them all but came back to her,” Kirkland said.

“We took her outside and knelt down by her. She was skin and bones. She leaned into my husband and gave him the tiniest lick on the chin. That was it.”

Kirkland had good instincts not just for a wonderful pet, which Sophie turned out to be, but also for an awesome competition dog.

OTCH Sophie Sparkle Gypsy UDX4 OM6 RN is the second mixed-breed dog (and only one of two) to earn the AKC’s Obedience Trial Championship (OTCH). Sophie finished the OTCH title on July 20, 2013, at the BelleCity Kennel Club trial. The first All-American to earn the OTCH was Twister, owned by Pat Mann of Lakeland, FL.

Kirkland, a resident of Swansea, IL, began training Sophie for competition after she and husband, Dennis Douglas, added a Golden Retriever puppy to the household. She thought obedience would be a great family activity with her mother Tess Kirkland, who formerly competed with Great Danes and a Giant Schnauzer.

“My mother had trained and competed with a few of her dogs in years past, and once we had the two dogs, I convinced Mom that getting back into training obedience and teaching me would be fun, and we could have some great mother/daughter times,” Kirkland said. “It worked until Mom suffered an illness that left her too weak to continue. However, I was bitten by the obedience bug and now train and show both dogs.”

Sophie was about 3 years old when she started formal competition obedience training and today is 10 years old. Despite her poor physical condition when she was turned into the Highland (IL) no-kill animal shelter, Kirkland said she has never seen any evidence of abuse.

“She really likes everyone and has from the beginning. I believe she was a chained-up dog. She has a small scar that is in a line where a collar sits, and she jumps straight up when she is excited like a dog who is at the end of a chain or tie. We think she slipped her collar and ran.”

Kirkland said she was thrilled when the AKC started the Canine Partners program and opened obedience trials to all dogs, including mixed-breeds. “We became part of the AKC All American Canine Partner program as soon as we could so I could show both dogs at one venue.”

Kirkland and Douglas are members of the Mound City Obedience Training Club and BelleCity Kennel Club and also train at DSK Dogs in Caseyville, IL. “We have many folks to thank who have helped us along our way, particularly my mom, and Kim Berkley,” she said.

Sophie’s favorite part of obedience is “getting to go. She also loves her play time after working hard – any squeaky toy will do,” Kirkland said. “Her least favorite thing is the metal scent article. She does it, but sometime she just has that look on her face. You know what I mean.”

“I am just so proud of her. She often gets compliments from folks about what a nice working dog she is,” Julie said. “She is a competitive girl and loves to show. Whenever we go through the garage to go for a walk, train or to the grooming table, she always prances by the van door wanting to go.”