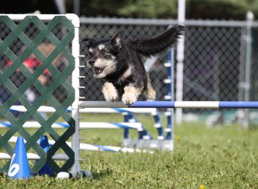 MACH Hatti MXS MJS made the finals of the 16-inch jump height division at the 2015 AKC National Agility Championships on March 29 in Reno, NV, and finished in 10th place.

It was love at first sight for Elizabeth White and Hatti, who was picked up as a stray in fall 2006. As soon as the local humane association posted a picture of Hatti on its website, Elizabeth fell in love with the little stray.

The adoption paperwork was filled out quickly, and Hatti found herself going to her “forever home.”

“While being a stray, Hatti had developed anxiety around loud sounds. So I took her to a beginning obedience class,” said Elizabeth, a resident of Eau Claire, WI. “We had so much fun training that we repeated the class again, and again, until our instructor suggested trying the sport of agility.”

The pair quickly signed up for an agility class, and it was soon clear that Hatti loved the sport. The team continued training while Elizabeth completed high school and did not stop training even when Elizabeth went to college.

”I can’t believe how far my little rescue dog has come,” she said.