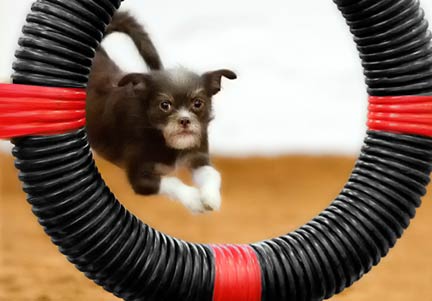 Jinx was rescued as a small puppy and had obviously been feral for some amount of time, Adrienne said.

“I call her a gremlin-ewok mix, and people seem to get it instantly.  She’s smart, but is sometimes hard to motivate. Food matters more than anything to her, followed by other dogs (she loves big dogs especially) and then me.  I’m gradually rising up the chart, though, and she’s become a really fine mini agility dog.”

Jinx earned her Master Agility Championship (MACH) on Nov. 15, 2014, at the Dallas Agility Working Group trial. Adrienne said she hopes to earn another MACH on Jinx before her third birthday!

For information on joining the AKC Canine Partners community and making your dog eligible for the many fun AKC activities, including Agility: /dog-owners/canine-partners/