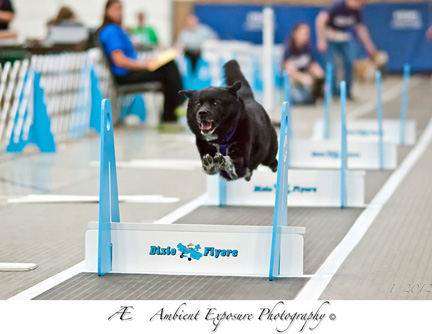 The American Kennel Club has worked with the North American Flyball Association (NAFA) since 2012 on recognizing titles. Flyball competitors can apply to the AKC to have the titles of Flyball Dog Champion (FDCh); Flyball Master (FM); and ONYX recognized on their AKC records.

Flyball is open to all dogs, including mixed-breeds, and read on to meet an AKC Canine Partners dog who has achieved the title of Flyball Master!

Horton, a chow-cattle dog mix, came to Alabama by way of Missouri where he was found as a 9-month-old stray.

His puppy face and his desire for closeness were the traits that proved to be a good fit for his first-time dog owner Barbara Wojciak.

While taking obedience classes, Barb learned about the sport of flyball, and at age 3, Horton began training in the sport.  He is known as a steady dog on his team, the Dixie Flyers of Birmingham, AL, and has continued to hone his skills during his flyball career.

“While Horton has earned three rally obedience titles, he prefers the fast pace and excitement of flyball,” Barb said.

Horton has achieved the title of Flyball Master with NAFA for earning 5,000 points in the sport!

For more information on flyball, go to: www.flyball.org

For more information on AKC Title Recognition Program for Flyball, go to: https://www.akc.org/events/title-recognition-program/flyball/