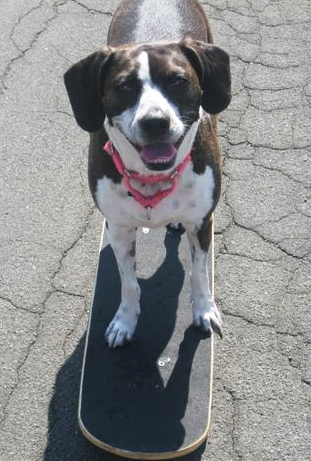 Hailey Has Plenty of Tricks Up Her Paws

Baseballs, basketballs, skateboards and Frisbees – most parents invest in plenty of these items for their kids.

And in Karen Profenna’s case, that includes her four-legged family member.

Hailey – a little black-and-white fireball – can swing a bat, dunk a basketball, ride a skateboard and soar into the air to catch a Frisbee – skills that have made her a champion trick dog and earned her an impressive array of titles.

Profenna had never even trained a dog beyond the basic sit and down required for household manners. But when she and Hailey crossed paths, she knew had to take action in order to live with the lively Beagle-Boston Terrier mix.

“Hailey was literally the puppy from hell.  She was so hyper and so mischievous that I was at wits’ end.  I started taking obedience lessons from just about every instructor that I could get my hands on: privates, group lessons and whatever I could get myself and her into,” said Profenna, a resident of New City, NY. “I can’t begin to tell you how many times she flunked obedience class.”

The energetic dog did not ever seem to get tired, and it became a Profenna family project to get her to sleep. “I used to literally walk my bedroom floor with her in my arms rocking her to sleep and then while holding her glide into bed with her as not to wake her,” she said. “My children had to be quiet if I had gotten her to sleep as not to wake the terror.”

Profenna was nearly at the point of returning Hailey to her fiancée, who had given her Hailey as a present. “I asked my obedience instructor how I can redirect her energy in a positive way as being up 24/7 was not working for me. My obedience instructor told me to try agility.  I never heard of agility before but if it helped calm her down I figured I had nothing to lose and everything to gain. “

Agility and more training proved to be the outlet that Hailey needed. Profenna also enrolled Hailey in Rally and kept her in Obedience classes and was soon at “dog school” with Hailey four nights a week. “She loved it and seemed to actually be grasping both obedience and agility,” she said.

Soon Hailey was competing in obedience and rally competitions and winning classes. “A dog that was once a hyperactive nut was now competing and not just qualifying but was pulling off top scores,” Profenna said. “Don’t get me wrong…she is still hyperactive, and I have yet to wear her down but it is now a controlled hyper and is an extreme pleasure to be with her.”

When Hailey was 2 years old, Profenna learned of a three-day seminar on shaping dog behavior using clicker training and decided to attend. “We had a blast and it was the best money ever spent,” she said. It was through the seminar that Profenna learned how to shape Hailey’s energy into performing a number of behaviors that resulted in an array of tricks.

“We learned so many things from handstands to skateboarding to open/closing lights and doors,” she said. “Hailey and I bonded through clicker training and free shaping like I never thought was possible.

“At this point not only was I competing in agility, rally and obedience but I worked with her on free shaping at every opportunity I could even if it was only 5 minutes here and there.  It was so much fun that I looked at every toy section or kids’ section no matter what store I would go into and see what I could figure out for her to do.  We got skateboards, cash registers, basketball sets, bowling sets, wooden puzzles, piggy banks, etc. Whatever we could find we would pick up and give it a whirl. “

As a result, Hailey has an impressive repertoire that would challenge any professional canine actress.

Some of her crowd favorites include “baseball (I put a ball on a tee and she hits the ball with a bat and runs to the bases), saying her prayers, getting a tissue when I sneeze, wrapping herself in a blanket.  We also do a card trick where she uses her obedience Utility skills.  I put four cards out and take one, show it to her and ask her to use her psychic powers to get me the one that I choose after I put it back with the others.  It amazes people that don’t know the scent discrimination exercise.”

Hailey has earned the title of Champion Trick Dog through renowned dog trick trainer Kyra Sundance’s Do More With Your Dog! program and also is a member of Sundance’s National All Star Performance Team.

But the best part of being a super entertainer – plus a very personable dog – is being able to help others. Hailey is a certified therapy dog and makes about 200 visits a year to nursing homes, hospitals and schools. She also does her part in her own neighborhood where she helps a child who is confined to a wheelchair due to an illness.

“Day after day I would see the other children playing sports in the development, and I felt bad that this child could only watch due to his disability.  One day when I was walking Hailey, he asked me what I was going to do and I said that she and I were going to play Frisbee and asked if he wanted to come over and watch. His face lit up as his nurse agreed and let him come over. Hailey was extremely energetic and flew to get the Frisbee and hit nice heights to get it.  He loved watching it and asked if he could play with her.  I gave him a small Frisbee and he threw it for her to the best of his ability and she caught it.  It was so rewarding to enable a child unable to physically play sports to actually play sports via a dog.  He was just so proud of himself. “

“My goals with Hailey are simple.  I want her to maximize her potential and be the best dog she can be,” Profenna said. “As a team I want Hailey and I to touch as many lives and bring as much joy as we can to as many people we can.  She is an awesome dog and I can’t begin to tell you how many lives she has touched and changed.”