Kola Loves to Get the Bag! 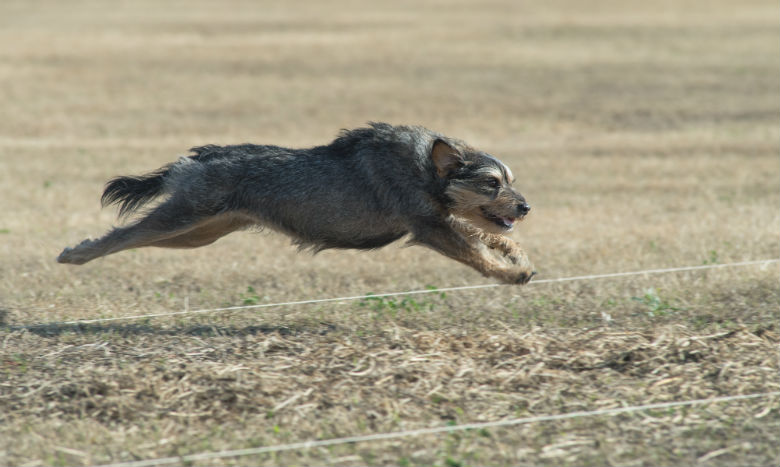 Kola is a rescue terrier mix whose favorite thing in life is lure coursing – a sport that allows dogs to release their prey drive. Dogs chase a lure – white trash bags – tied to a pulley system that moves it jerkily around a field. Most dogs love to chase it. Kola has been so successful at AKC Coursing Ability Tests that she recently earned the highest title in the sport – the Coursing Ability Excellent (CAX) for 25 passes. Her owner Molly Schmid tells their story:

Evita Kola Gretzky OA AXJ NF CAX CGC (“Kola”) is a terrier mix, who was rescued from a Southern California pound in February 2010 when she was about 6 months old.  We started and continue training in agility and K9 Nose Work. She’s an easy, mellow dog.

And then we found lure coursing. By the second fun run, she recognized the sound of the motors, and I discovered her cloth crate was insufficient for lure coursing.  By the third fun run, she decided that non-stop barking and squealing would help pass the time, and we moved (permanently) to the parking lot.

She (and I) spend a lot of energy getting to the start line on a leash, but as we set up and hear “Tally-Ho!,” she bolts away, blasters on. GET. THE. BAG.  Around she goes. GET. THE. BAG. And then the lure circles back, slows down, and she can pounce on the bags, exhausted.

She’s gotten clever about anticipating turns  and cutting corners, though the SoCal Lure Coursing crew have gotten even better at changing the directions, so sometimes Kola is cutting right, and the lure goes off to the left.  And then we get to see her fly.  Because, she MUST. GET. THE. BAG.

Kola lays it all out in lure coursing and it’s a delight to see.