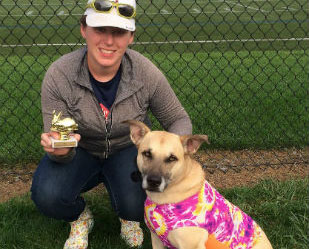 He brought home the CAX6 at the Langley Kennel Club’s Coursing Ability Tests (CAT) held Oct. 8-9 in Palmyra, PA. Achieving the CAX, the top title in AKC CAT competitions, requires a dog to pass the test 25 times so Kai has had 150 successful runs!

For his 150th run, the Langley Kennel Club awarded him the Golden Bunny Trophy. Kai is owned by Stephanie Markgraf of Pittsburgh, PA, and is handled by Kate Renner who is pictured with him and the trophy.

“There is no way Kai would rather spend his time than chasing the lure around the field. He loves chasing his ‘bunnies,’ “ Markgraf said.

The CAT tests are open to all dogs 1 year and older. Dogs pursue a lure, usually white trash bags, tied to a pulley system that moves the lure quickly and jerkily around the field, bringing out a dogs’ prey drive. Dogs that are more than 12-inches tall at the shoulder run a 600-yard course, and those shorter than 12-inches run a 300-yard course.

Kai’s accomplishments mean even more to Stephanie and Kate since he had to undergo surgery last year for cranial cruciate ligament disease. But after months of rehab, he returned better than ever. Kai also competes in dock diving and weight pull.

He is a member of the AKC Canine Partners program for all dogs, including mixed-breeds and rescues.