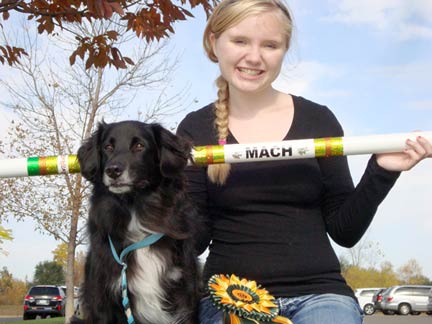 Danielle Oss and her family adopted Hailey, a Border Collie-retriever mix, from a shelter in 2008.

The following summer on a trip to the Minnesota State Fair, Danielle saw an agility demonstration and knew that she had to try the sport with Hailey.

“After watching the demonstrations, I told my mom that this is what I wanted to do,” Danielle said.

They enrolled Hailey in training classes and discovered it was a great release for her energy. Soon, Danielle and Hailey were competing in obedience and agility, earning many titles, including the Beginner Novice and Companion Dog titles in AKC Obedience.

“But agility was what she liked the best,” said Danielle, now a high school senior. “She is a fantastic dog to run in agility. More often than not, she recovers from my handling errors and saves the run.”

In addition, Hailey is a certified therapy dog who visits libraries and schools to work in children reading programs.

“Regardless of her bad habit of lying on top of the book and falling asleep, the kids still adore Hailey,” Danielle said.

For information on joining the AKC Canine Partners community and discovering the fun world of AKC dog sports: /dog-owners/canine-partners/