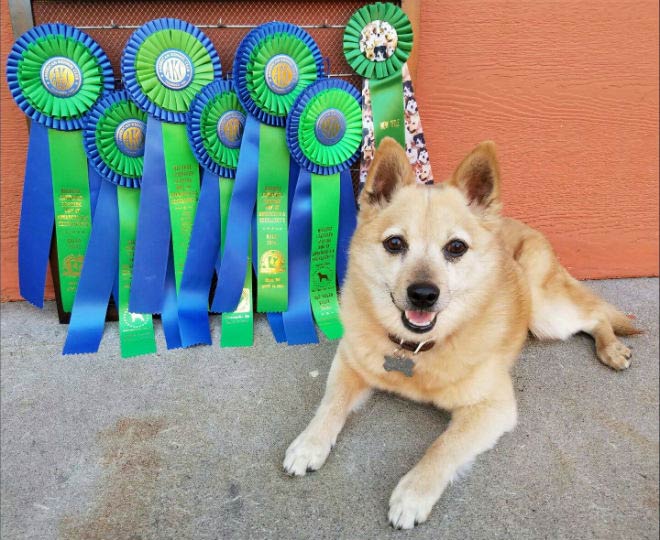 Jerry was adopted from a small shelter in Minnesota back in 2006. He is my first competitive performance dog and he has taught me patience, diligence and humility.

I started taking him to obedience classes just to learn the basics. We both enjoyed the classes so much that we continued to training until we reached utility level exercises.

Now, this all happened before mixed breeds were allowed to compete in AKC events. My instructor was the first to tell me about the AKC Canine Partners program and urged us to get registered. She was also the one who introduced me to rally. I remember signing up for our first AKC Rally competition and how much fun we had out there. We loved it so much that we decided to stick with the sport and earn our RAE title.

Our plans were put on hold for a while as I finished college. We entered shows here and there when I was home eventually earning our Rally Excellent (RE). After that we started our journey for the highly anticipated RAE. Unknowingly this journey was about to take an even longer detour.

On Nov. 3, 2014, Jerry suddenly developed severe pancreatitis that had him hospitalized for several days. His pancreatitis was one of the most severe cases the vet had ever seen. I thought that was the end of it but he proved me wrong. He’s a trooper and he wasn’t about to let this get the best of him.  It took a year and a half to recover during which we dealt with several complications including diabetes. This year we are back in the swing of things picking up right where we left off and loving every second of it.

We earned the RAE at the Wright County Kennel Club Obedience and Rally Trials on March 12, 2016. Along with earning our RAE, we had a combined score of a perfect 200 and won the rally high combined award. In Jerry’s career he has earned six rally high combined scores, and we are now working toward our RAE2. We are hoping to make it to the AKC Rally National Championship next year. Jerry just turned 11 this April!