It’s National Mutt Day! A Salute to the First Mixed-Breed To Win an AKC Title 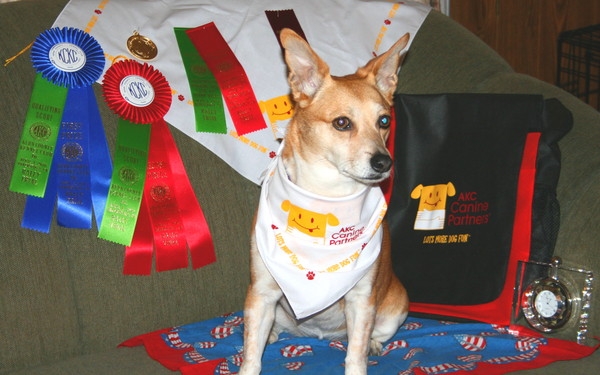 A little more than five years ago, the American Kennel Club opened the door for mixed-breeds to compete.

On the first weekend of competition in April 2010, a former shelter pup named Katylee qualified in AKC Rally on three straight days to earn her AKC Rally Novice (RN) title. She became the first mixed-breed dog to ever win an AKC title.

“My little red dog made AKC history that day, and she made her family extremely proud,“ said owner/handler Sharon Stubbs of Bakersfield, CA.

Katylee’s original owners turned her into the Bakersfield Animal Shelter when she was just a 10-week-old puppy because they said she was too noisy. Lucky for her, the Stubbs family was seeking a new family addition at the same time.

“That Saturday in May 2002, while we were considering several other pups in the puppy section, we heard this excited little bark coming from down the hall. We followed the bark, and that is how we found Katy or rather she found us.”

Stubbs took Katylee to basic obedience training, and she did so well that they continued on with competition obedience classes and rally classes. But there was one problem at that time; Katylee was ineligible for the AKC events that dominate their area.

“During the next three years, Katy trained and I filled out every AKC survey I could find regarding the admittance of mixed breeds into Companion Events …even sent a few extra emails,” Stubbs said. “Needless to say, we were thrilled in April 2009 when AKC voted to allow mixed breeds to compete.”

Since that first weekend of competition, Katylee, now 13 years old, went on to earn her AKC Rally Excellent title and the AKC Obedience title of Beginner Novice. She also became a certified therapy dog and qualified for the AKC Therapy Dog title.

The AKC Canine Partners program is for all dogs, including mixed-breeds and rescues. The Canine Partners number is the ticket to participate in AKC Agility, Rally, Obedience, Tracking, Coursing Ability and much more!