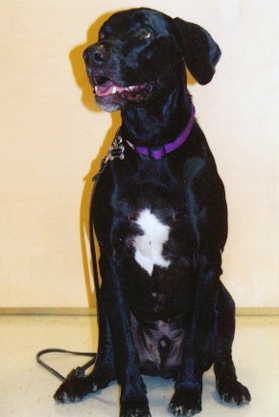 Has H. Has CDX RAE CGCA owned by Judith Kovach of  Wausau, WI

Has was born in 2004 on St. Croix in the U.S. Virgin Islands, where he lived until early 2011. His mother was a Weimaraner, and his father was a Blue Tick Coonhound.

Judith was still living in the Virgin Islands when she began training him for rally. She had never seen a rally competition so she taught him from what she learned from books.

Has first got a chance to compete in 2010 when Judith took him on a trip to Detroit, MI, where he earned blue ribbons at his first two novice competitions. He began competing regularly when he and his owner moved to Wisconsin in 2011.

He completed his AKC Rally Advanced Excellent title (highest honor in AKC Rally) with a first place on Nov. 3, 2013, at the Timber Ridge Obedience Club trial in Amherst Junction, WI.

Learn more about and how to get your dog involved in competitive obedience: /events/obedience/