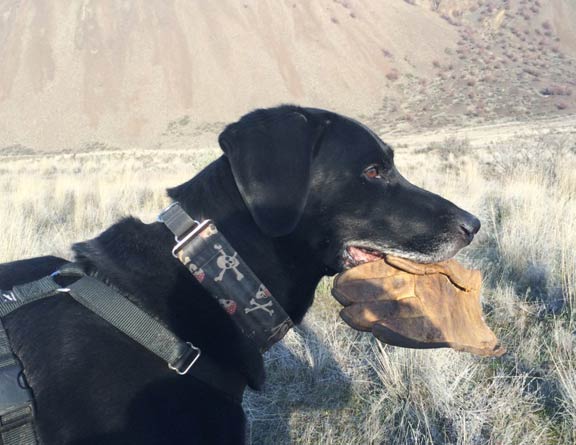 Seven-year-old Griffin came into being through an accidental mating between a black German Shepherd female and a German Short-haired Pointer male.

“He is a fine hunting dog with a strong work ethic, making him an excellent tracking dog,” Maureen said.

Griffin started wilderness tracking as a puppy, followed by urban and field tracking; he earned his first Tracking Dog title with the Mixed Breed Dog Club of America (MBDCA) in 2012 followed by the MBDCA Tracking Dog Excellent in 2013.

“When the opportunity arose to track with the AKC, we had to jump on it, as Griffin aspires to attain the AKC Champion Tracker (CT) status.”

In addition to competition tracking, Griffin puts his incredible nose to good use by helping find lost pets.

“Griffin has successfully tracked two lost dogs and has attained local media coverage for his tracking and search and rescue abilities,” Maureen said. “He is sociable, very athletic, agile, muscularly fit, and strong so he also enjoys hiking, swimming and a fast game of Frisbee.”

Griffin competes in AKC Tracking tests through the AKC Canine Partners program for all dogs, including mixed-breeds and rescues.