Go Sit on the Bench! 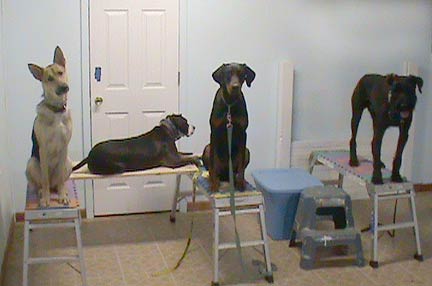 This training tip is contributed by dog trainer Kay Lackey of Lodi, OH, owner of Katie’s Ark Dog Training. She is the owner of an AKC Canine Partner named Rocky, a pitbull mix who is a certified therapy dog and rally competitor. Lackey, who has a bachelor’s degree in wildlife science, has worked with animals her entire life. In addition to Rocky, she owns a Giant Schnauzer and a German Shepherd and is also involved in dog rescue and fostering. This article originally appeared in the AKC Canine Partners News.

Most people have times where they need their dog out of the way during the day but don’t want to put them in their crate. The climb bench is an alternative to the crate.

The bench can be anything, as long as it at least 6 inches off the ground and big enough that the dog can lie down. The idea is that the dog can still be in the center of activity but is out of the way. The dog can stand, sit or lie down on the bench, but they can’t whine or bark. Most people find it very useful at the front door. It keeps an excited dog out of the way until it calms down. Once the dog is calm, it is less likely to cause problems, like jumping.

Teaching the climb is easy but takes time. Here are the steps:

Step 1:   Walk your dog towards the bench or perch with a leash. Encourage the dog to jump up onto it. You might have to pick the dog up and put him or her on it the first few times. Praise and reward when they are on the bench.

Step 2:   The second the dog jumps onto the bench, say the command you will be using for this exercise. I use the command “climb,” but you can use anything you want.

Step 3:   Once the dog is up there for a few seconds, release the dog with a second command. This can be anything you want but make sure it is not a common word, like “okay.” Some good examples are “free,” “done,” “break,” etc. If the dog jumps off before you release it, encourage them to get right back up. Praise and reward for staying on the bench.

Step 4: Once the dog is getting on the bench on command, staying for a short period until released, and releasing on command, you can now work on duration of the stay on the bench plus introducing distractions and phasing out the leash.
For information on joining the AKC Canine Partners community, the AKC program for ALL dogs, including rescues: /dog-owners/canine-partners/