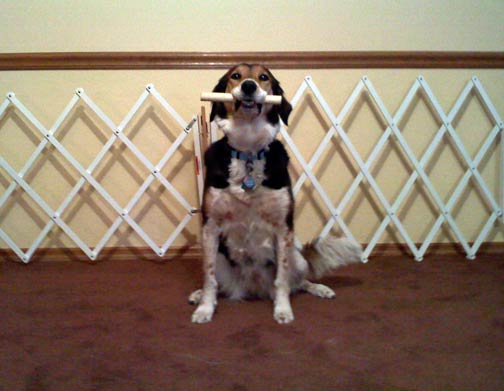 This training tip is contributed by Julie Kirkland of Swansea, IL, owner and trainer of OTCH Sophie Sparkle Gypsy UDX4 OM6 RN. Julie and Sophie, a former shelter dog, have made many achievements in Obedience, including winning High in Trial and being only the second All-American Dog team to earn the Obedience Trial Championship. They also have earned invitations to the AKC National Obedience Invitational and the AKC National Obedience Championship.

Here Julie shares tips on teaching the Go Out part of Directed Jumping in Utility – also a helpful skill for teaching your dog distance and going away from you.

Sophie isn’t a natural retriever, but she has an imagination and loves to play. That makes this activity a winner for us. I didn’t use it to initially teach go-outs, just reinforce them, but I don’t know why you couldn’t.

Using Velcro and about a 6 to 8 inch piece of dowel rod (diameter depends on your dog), you make some retrieving toys/sticks. I put the stiff/rigid half of the Velcro on the stanchion and the soft half on the dowel.

I played with her and the rod to get her to like it.

I then stuck it to the Velcro on the stanchion, took her a short distance, sent her and when she was close, told her to “get it” (or some such). When she did, I walked up and treated her. I would occasionally throw it for a play reward.

You might have to show it to your dog by walking up to it and touching it before you send a few times until they get the idea.

I would put it on the floor too. Note, my treating became a guide into a turn and sit after she got the idea to grab the dowel.

Once she was comfortable going to get it and she had the idea of turning back and being asked to sit, the distance slowly grew with her success.

We are at the point that once she does her turn and sit, I will either go to her, throw it or treat her, ask her to do a straight recall with it in her mouth, or send her over a jump with it.

We do end with a play session with the dowel of course!

When repetition is the key, it is nice to have many ways to do the same thing to keep training fun and stimulating.