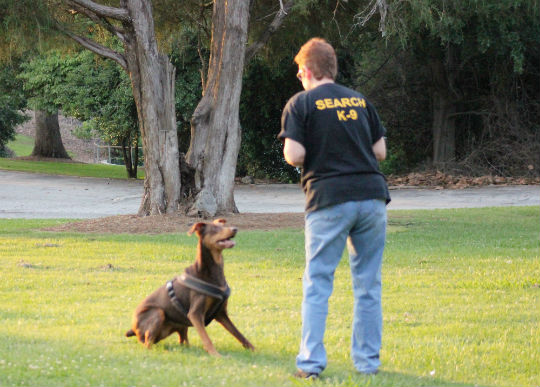 In 2002, I pulled a tiny, emaciated red female Doberman from a local shelter. She was just 13.5 weeks old, and had been in the shelter more than four weeks. Since I had a young male that was taking a lot of my time, I thought I would get her healthy, and find a great home for her, since I was involved with Doberman Rescue.

The vet checkup indicated a fever. Days later it would be declared pneumonia, and when that didn’t clear up, she was tested for distemper.  The result: she had the disease for which there was no longer any “serum.”  I was told there was nothing to be done and not to get attached as she would not survive.

But she was a fighter, and we were happy to fight for her until she was declared free and healthy several months later. Of course, by then we were so crazy about her that the thought of her going anywhere was banished from our minds.  We named her Dark Cloud’s Blithe Spirit and called her Parker.

A bit under the Doberman standard in height, her diminutive size made her a perfect agility partner, fast and agile, and we spent many weekends at agility trials. Her fearless Doberman temperament had her passing the Doberman Working Aptitude Evaluation with flying colors.  https://www.youtube.com/watch?v=gBoWSuQWf-U

In 2010, we were introduced to a new sport called K9 Nose Work.  We attended a workshop taught by two founders of the sport, Amy Herot and Ron Gaunt of the National Association of Canine Scent Work.  The sport is based on the training of dogs for work in narcotics and explosive detection, but done for sport, and Parker loved it.

I began videotaping her “searches” so that I could learn from them, and when Ron and Amy returned for the next level of training, they asked if the videos could be used in the NACSW’s first DVD introducing the sport of K9 Nose Work to the world. I was thrilled!

For Parker and me, it was a fun way to spend time together, and for me, the sport was an amazing way to learn more about my dog.  It was an opportunity to allow her to be my teacher.  Our training happened wherever we happened  to be — it’s a mobile sport.  Trips to the store became an opportunity to stop and set out “hides” and let her search them out.

Parker’s DVD, How One Dog Got Started in K9 Nose Work was released in October 2012, and a year later it was nominated for a Dog Writers Association of America award. With the popularity of K9 Nosework, the DVD has stayed on Dogwise’s best seller list ever since its release, and the emaciated little pup, once languishing in a shelter, continues to introduce people all over, to a terrific new sport. At almost 14 years old, Parker still loves her sport and looks for any chance to get out and sniff!