Get An Introduction to Agility: AKC’s My Dog Can Do That! 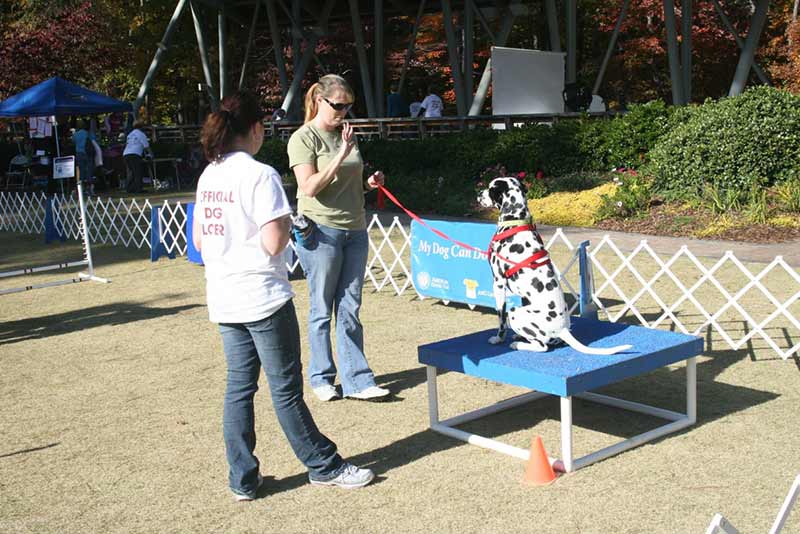 Riley peered through the tunnel, as if he were Alice about to tumble down the rabbit’s hole into Wonderland. Such a small space, such a big dog, it seemed impossible. Yet, on a bright, sunny Sunday morning in May, Riley’s trusted, well-loved human, Jay Cruz, was asking the 14-month-old Mastiff to squeeze his whole body, all 170 pounds, through a tube. He had to crouch to even see the cheese at the end of the tunnel. He stared, sat, stood up again, took a couple of tentative steps forward, bumped his forehead on the top of the tunnel, and sat. Then he ducked down and peered at the cheese some more, every so often glancing at Cruz, seeming to say, “Me? In there? Are you kidding?” A crowd gathered, some with show dogs on leads, hushed, hanging on even the tiniest movement of this giant dog. Slowly, Riley lowered himself into a down, and then, paw by paw, inched toward the cheese. First one foot, then the other, and his head were in the tunnel. After about a minute, he emerged on the other side, to cheers and applause. “Riley! You did it!,” Cruz yelled.

On May 20, Riley and Cruz were among more than 155 dog-and-handler teams who came out for a new AKC program—My Dog Can Do That—at the Long Island Kennel Club dog show, in Bethpage, New York. The program offers a chance for newbies to try out a basic agility course, with the help and supervision of agility trainers and competitors. “By giving people a taste of agility, we can get them excited about training and even competing in AKC events with their dogs,” says Mark Dunn, assistant vice president, AKC Canine Partners program. “It’s really exciting to see people realize that not only can their dog ‘do that,’ but they can do it too!” Over 3,000 dogs have gone through a My Dog Can Do That agility course, offered at 16 dog shows or pet expos, as well as other community events throughout 2012. They are open to all dogs, from champions in the show ring to mixed-breeds from shelters. Competitive agility events are also open to everyone. All kinds of canine companions cantry and perhaps someday compete in this thrilling, fast-paced sport. Most, like Riley, had never set foot in a ring before. Many said they became interested in agility because of the canine acrobatics they witness at home, great leaps from floor to countertop, or paws bouncing from sofa to ottoman to chair. Still others had varying levels of experience.

Two Siberian Huskies illustrated the diversity of the day’s participants. Alan Davis brought his show dog Frosty—GCh. Marionhill’s Morning Frost, OA, OAJ, OAP, AJP—from the conformation ring. With nine agility titles, Frosty needed no coaching to handle the basic obstacles—jump, tunnel, table, and weaves—that had been set up for the novices. Davis came to give beginners a glimpse at what’s possible, offering an impromptu demonstration of the champion’s skill. On the other end of the spectrum was Luann Johnson’s Siberian Husky, Makita Skye. Johnson found Makita in a Long Island municipal pound in September 2011, a wild youngster who had bounced from one failed adoption to another. By the time Johnson met her, Makita was considered “uncontrollable” and her time was
running out. “We had a special understanding from the moment we met,” she recalls. Johnson, who had gained a lot of weight after a recent back surgery, says Makita instinctively knew how to help, fetching her shoes and items her owner dropped. With Makita, Johnson started to enjoy walking, and she grew lighter in body and spirit. Still, the young Husky needed guidance and an outlet for her
boundless sled-dog energy. Johnson had started taking agility at Doggie U, a local indoor training facility. When she saw the flyer for the Bethpage show with the words MY DOG CAN DO THAT! blazing across the top, she leaped at the chance to try theoutdoor course. “She was so excited and did the entire run without hesitation. She jumped the hurdle, ran through the tunnel, weaved through the poles (with help), and sat proudly on the table to finish. It was like a doggie playground.”

Johnson plans to continue classes and hopes someday to enter a trial. Cruz, too, is hooked. He says Riley had a ball at My Dog Can Do That, especially when everyone cheered after he made it through the tunnel. Cruz is now looking for a place to take classes, but until he finds one, he will improvise. “I created an agility track for Riley with things for him to jump all around the outside of the house,” Cruz says. “I have to create a tunnel big enough for him to fit. That’s going to be a challenge, but I already have an idea … and it involves a kiddie pool!”

Sound like your pup is up to the challenge? Take the first step to competing in agility is signing him up for AKC Canine Partners!