Gator: Not the Fastest, But Definitely the Cutest 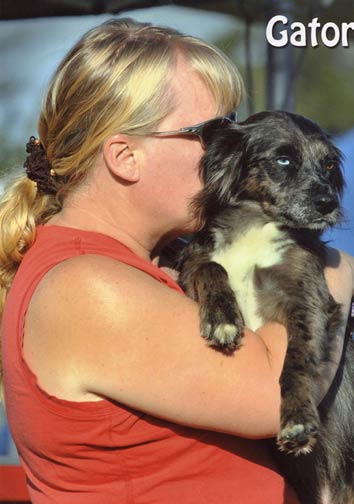 Gator was adopted by Laurie at 8 months of age. “He was severely ill and during recovery he stole my heart. He’s been my soul mate ever since, sharing my pillow each night,” Laurie said.

A long-time agility competitor, Laurie started training Gator in the sport to boost his confidence.

“Agility helped overcome some of Gator’s fear issues.  While he was never the fastest, nor the most reliable, he definitely was the cutest.  I was thrilled to finally accomplish his MACH title.” Now 9 years old, Gator earned that highest honor in AKC Agility – the Master Agility Championship (MACH) — on Sept. 27, 2014, at the Aztec Doberman Pinscher Club of San Diego all-breed agility trial.

Gator competes in the fun sport of agility – an obstacle course for dogs – through the AKC Canine Partners program for all dogs, including mixed-breeds and rescues. Look here for information.