Gabe Has Spent 10 Years Soothing Others as Therapy Dog 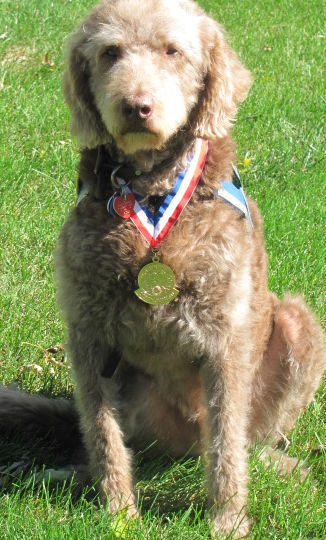 Gabe RN THDD CGC, owned by Joyce Kilgard of Coal Valley, IL, was a natural therapy dog from day one. He was already certified and started working at age 1 year. He recently earned the AKC Distinguished Therapy Dog award (THDD) for making more than 400 visits.

Eleven-year-old Gabe is a very special dog who has been a therapy dog most of his life, starting at the age of 1 year.

“He was instantly a natural, and it was clear he was born to do this,” Joyce said.

Gabe became a part of Joyce’s family at age 4 months after she got him from a friend.  He quickly earned the AKC Canine Good Citizen award at 6 months old from Quad City Dog Obedience Club.  “The following November was when we began his journey as a therapy dog through Therapy Dogs Incorporated (now known as Alliance of Therapy Dogs).  We started out just going to hospitals, and later began going to nursing homes and day care facilities as well.  Gabe has a special knack with people of all ages so he gets along great with everyone we visit.  He likes to entertain the people he visits by dressing up in various outfit, such as a reindeer at Christmas, a leprechaun at St. Patrick’s Day, and the Easter bunny in the spring.  The kids especially enjoy seeing these costumes; they absolutely adore him, just as he does them.”

Gabe specializes in visiting the oncology department. “He really looks deeply into people’s eyes and seems to feel what they’re feeling.  He reads their facial expressions and behaves accordingly. One story that stands out is when we were on the oncology floor, and Gabe heard a patient crying.  We weren’t allowed to go in the room for medical reasons, but Gabe insisted on sitting outside that room for nearly a half hour.  I had to reassure him that the patient would be okay before he was willing to move on.”

In June, Gabe earned the title of “Pet of the Year” through a local magazine, and his photo graced the cover of the issue.

“Gabe has really earned that title through all his accomplishments and special abilities.  He can really turn a non-dog lover into a dog lover and knows how to make people feel good.”

Gabe is a member of the AKC Canine Partners program for all dogs, including mixed-breeds and rescues.