You Can’t Judge a Dog By His Coat: From Hunting to Herding, This All-American Dog Holds His Own 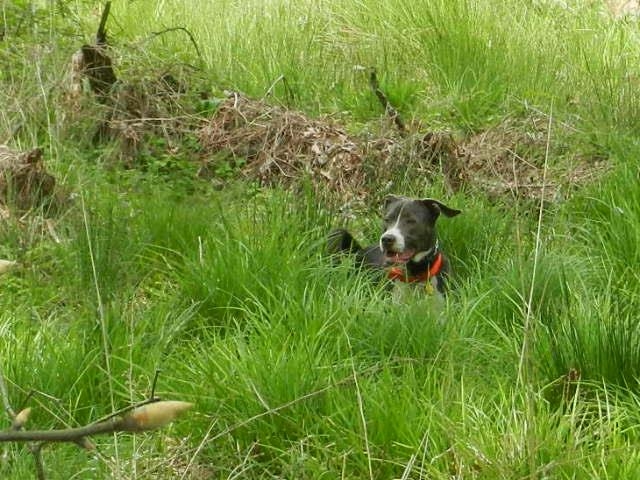 This article originally appeared in the summer 2013 issue of the AKC Canine Partners News. Since that time, Diesel, now 4 years old, has added many other achievements, including earning the top AKC Rally title of Rally Advanced Excellent. His full name is now Tennessee Diesel Smoke CD BN GN RAE CGCA.

The pointers and setters had scoured the field but turned up no birds that day.

Their owners called them off the hunt and were relaxing with some small talk when a father and his daughter appeared with a large dog of undetermined breed.

“Hey, we already hunted this field,” one called out. “There aren’t any birds left.”

But their dog tensed up, straining at his leash. “He says there’s one in there,” the father said.

The hunters went back to their conversation, and the mixed-breed dog began running through the field.

“Shortly after Diesel flushed another pheasant right in front of these guys and their dogs. They were shocked that their dogs had missed this bird and even more shocked a non-hunting breed mutt had found it,” said Diesel’s owner and trainer Mandy Malin. “As we took the bird back to the car one hollers over to us ‘Want to buy a good bird dog?’ We just chuckled and said ‘Already got one.’

“I don’t think that either one of us could have been more proud of Diesel that day. Word has gotten around between the hunters, and now you’ll overhear ‘There’s that dog I was telling you about.’ “

Diesel, a former shelter dog, was rescued by Malin as a puppy and has turned out to be an incredible companion and performer. He loves to work and excels at Obedience and AKC Rally – and anything else that Malin has asked him to do from herding her chickens to hunting birds.

Malin, a dog groomer from Georgetown, Ohio, spotted Diesel on a website when he was just 6 weeks old and was being held in a shelter in Tennessee. Something about him clicked with her, and she drove four hours to adopt him.

“I have trained a few dogs in the past, but nothing farther than basic manners classes. He is the first dog that I have trained for competition or to hunt. I noticed how fast he seemed to pick things up and how he loved to learn so I decided to see just how far it would take him.”

As soon as Diesel was old enough, Malin began training him and taking him to classes. He excelled at training and she began to think that he may have the right stuff to compete.

At just 10 months old, Diesel entered an AKC Rally ring for the first time and exited with a first place. In a month, he had completed his Rally Novice (RN) title.

Currently, 2 ½ years old, Diesel has earned through the Rally Excellent (RE) title and is pursuing the Rally Advanced Excellent (RAE). Diesel qualified for the first-ever AKC Rally National Competition this year and competed at the event in Tulsa, Okla.

No slouch in Obedience either, he finished his Companion Dog (CD) title last year with two first and one second placement and has already earned a leg towards his Companion Dog Excellent title. To top all that off, Diesel (known formally as Tennessee Diesel Smoke CD BN RE) is a certified therapy dog and has passed the AKC Canine Good Citizen test.

As much as Diesel loves being in the ring, nothing can top his desire to hunt. Malin, who breeds and shows Bantam Cochin chickens, noticed Diesel’s potential after he started helping herd the birds into their pen at night.

“I think that’s how his love to hunt started. I would have him find the lost chickens and that was just a field day for him. After working the chickens for a while, I got the notion that he could make a good bird dog and introduced him to game bird scent. He picked right up on it and we moved to live birds. He has been an unstoppable hunting machine since.

“I’ll never forget the very first bird that he flushed. He was sniffing around a thicket and then I saw his tail kick into high gear. The next thing I saw was a beautiful pheasant rising out of the brush! He may not point, but he gets the job done.”
Diesel has become a legend in his community where hunting is a popular past time, and setters, pointers and retrievers are the dogs seen in the field.

“I get all kinds of interesting comments about him in the field, lots of confused looks too,” Malin said.

She recalled the very first time that she and her father took Diesel hunting. He helped a hunter without a dog track down a bird that he had shot.

“He sees us and asks ‘Is that dog any good?’ I answered, ‘It’s his first time out but he found one earlier.’ So the guy tells us about what happened, and I send Diesel to find the bird. He looked around for probably 10 minutes, tracking about a 50 yard area of woods and thick grass. I thought that he was just sniffing around and wasn’t sure if he would find it, then he starts digging in a thick pile of weeds. I go over there and had to literally dig the grass away from the bird, it was so deep in there. Needless to say that man was tickled pink!”

Malin has many goals for Diesel including taking him through the Obedience title of Utility Dog and, of course, “lots more hunting since that is his favorite thing in the world to do.”