From Alley to Rally – Success Story of a Little Street Dog 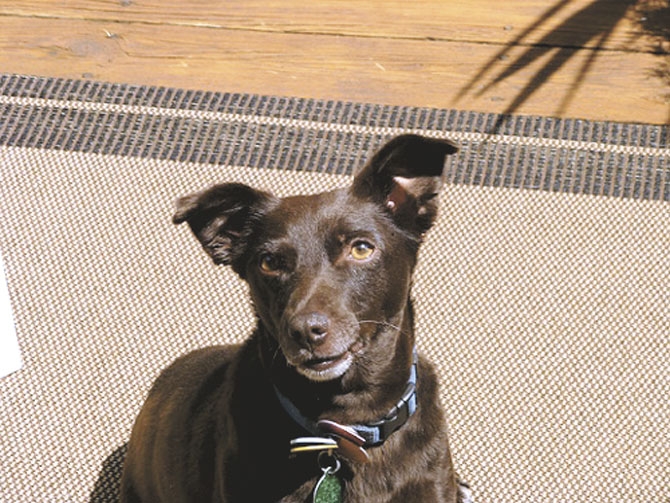 This story originally appeared in the summer 2012 issue of the AKC Canine Partners News and later was reprinted in a 2013 issue of AKC Family Dog magazine. The story won first place in the 2013 Dog Writers Association of America writing competition in the category of “Magazine Feature Article with the topic of Rescue.”Since this article was published, Brownie has gone on to earn the top AKC Rally award of Rally Advanced Excellent (RAE).

Like most dog owners, Sally Nist had puppy withdrawal symptoms when she had to spend a month away from her beloved Border Terrier.

So it’s not surprising that she took special interest in a dog that hung around the compound where she was stationed in Kosovo.

Nist, an employee of the US Department of State, asked the local guards who owned the little brown dog and was told “she is our dog.”

“She seemed to be in relatively good weight so I assumed they were caring for her and she followed her owner to work.  Later, I saw her with several dogs and realized she was a street pack dog but one that was somewhat domesticated, as some of the feral dogs had been abandoned by owners and were friendly. “

One rainy night, Nist returned home to find the dog she dubbed Brownie sitting in front of her apartment.

“I tried to entice her to come inside, and she put her paws on the threshold before darting back into the darkness.  The next day I bought dog food, hoping to be able to lure Brownie into my apartment.”

Nist did not see Brownie again for several days, but had already decided to adopt her and take her to America. She let everyone in the US Embassy know this in case they found Brownie.

“I didn't see her again until I received a call a week later from a fellow dog lover working in the embassy. Brownie had somehow gotten onto the compound, into his locked building and found his office.  Her beautiful tail was gangrenous, making her quite ill.  My colleague rushed her to the vet, where her tail was amputated to save her life.”

While it is uncertain what happened to Brownie, it is strongly suspected that children tied firecrackers to her tail, a common practice for street dogs and cats in Kosovo. Nist witnessed much abuse of homeless animals during her stay in the country.

“They are routinely shot, poisoned and trapped/killed as a population control measure.

I saw dogs put into garbage containers, chased, kicked, and abused in every way,” she said. ”Sadly, when a country has been at war for years, effects come out in horrible ways. Mistreatment of animals is often one of the results.”
Nist paid Brownie’s veterinary bills and made plans to take her home as her Kosovo assignment neared an end. But Brownie was too sick to travel so a colleague agreed to keep her until she recovered.

Back home in Alexandria, VA, Nist received an email from her colleague, reporting that Brownie appeared to be pregnant. But the Kosovo veterinarian said she just gained weight as a result of good food. “I think he was afraid we would leave her behind, which was not the case,” Nist said.

Six weeks after her rescue, Brownie flew on a 20-hour non-stop trip to Dulles Airport in Washington, DC. Nist was there to greet her. When Brownie stepped out of her crate, Nist said she burst into laughter. “She was HUGE and obviously very pregnant,” she said.

Ten days later, another part of the adventure began when Brownie delivered five dark brown puppies that looked just like her.

”Brownie had not yet learned to trust me, her surroundings or other people.  But Brownie was an excellent mother — overly excellent, in fact.  She would barely let me and a friend assist her with the birth. For the first two weeks after the puppies arrived, I followed this routine:  drag her out for potty breaks, drag her out of the whelping box (growling all the time) twice a day, tie her to the stair post in my living room, race to the whelping box located in my dining room to clean the bedding and accustom the puppies to human touch and smell, clean the whelping box, untie Brownie and watch her race to her puppies, counting each and every one, glaring at me the entire time.”

The puppies thrived and, though their color was the same as Mom, their size definitely was not. The puppies grew at a rapid rate. Brownie only weighed about 15 pounds at the time of her rescue, and her puppies were 5 to 7 pounds each by 5 weeks.

Nist found excellent homes for all the puppies. One went to the Washington state home of the parents of the colleague who kept Brownie in Kosovo.  “Her wonderful father flew out to carry the puppy home under the airplane seat,” Nist said. “My daughter ended up with two puppies, and two other families took the others.  They all grew to be 40 to 50 pounds.

“The only puppies Brownie still sees regularly are my daughter's dogs. She still wrestles them to the ground, although she is barely 12 inches at the shoulder.”

Once the puppies left for their new homes, Nist and Brownie still had work to do. Nist needed to socialize and train Brownie to assure she was a well-adjusted housemate for her and her 15-year-old retired champion Border Terrier, Rosie.

Nist is an experienced dog trainer, having trained and shown several dogs of different breeds, including Basset Hounds, Golden Retrievers and an English Springer Spaniel. She is the former obedience chairman for the Rapid City (SD) Kennel Club.

“With my obedience background and time available as a new retiree, I decided obedience training was critical for building Brownie's confidence with dogs and people.  As a result of fighting for her life on the streets of Kosovo, she was fairly dog aggressive when she arrived.”

Nist enrolled Brownie in a class with the Mount Vernon Training Club and was surprised at how quickly she learned obedience commands and exercises. While her initial goal was to help Brownie adjust to her new life, Nist’s thoughts began to turn to competition. She enrolled Brownie in the AKC Canine Partners program with the name of Kosovo Coffee Bean.

Brownie competed in her first Rally Novice trial in March 2011 and just a year and a month later, she finished her Rally Excellent (RE) title. She went through all three levels of Rally without a single non-qualifying score. In addition, she earned her Beginner Novice (BN) and Companion Dog (CD) titles in Obedience.  “No claim to an NQ-free title here,” Nist said, explaining that Brownie often liked to invent her own Novice exercises.

“I truly believe obedience training with an excellent club and the competition open to Brownie under the AKC Canine Partner Program allowed Brownie to develop her potential and move from a feral street dog to a confident competitor,” Nist said. “She still has her moments, but her trust of people and new situations is amazing.”

Nist said she gets a lot of praise for rescuing such a great dog, but the credit goes to Brownie who sought help when she was injured.

“Brownie was the smallest street dog in her pack and obviously the smartest as she decided to self-rescue.”