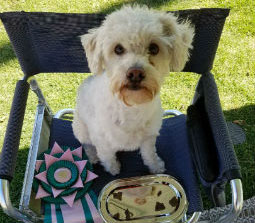 MACH The One and Only Mini Great Ape Joe MXB MJB owned by Naci Berkoz of Tarzana, CA

Monkey Joe was one of three pups that were found on the street with their mother, an American Eskimo, at roughly 4 weeks of age.

Naci’s friend agreed to foster the puppies until they were old enough to be placed in good homes, and that is how Naci first met Monkey Joe.

“I fell in love with Monkey Joe from day one, even though it took a couple of months to convince myself to keep him.  Best decision ever,” Naci said. “He has gone from a homeless pup living in the streets of Los Angeles to a perfect companion and an amazing agility dog.”

“And the cherry on top is that he is the most happy-go-lucky dog I've ever met,” Naci said.

Monkey Joe is a member of the AKC Canine Partners program for all dogs, including mixed-breeds and rescues.