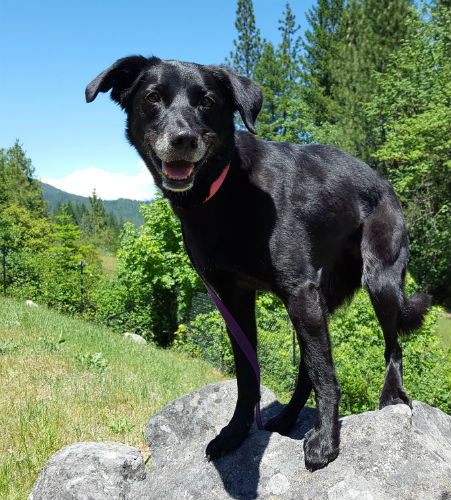 Ann-Marie Moore of San Francisco, CA, was just looking to get some dog owning experience when she offered to foster Roula, a young Lab mix picked up as a stray. She quickly fell in love and decided to keep her, but just as quickly knew she needed some training help. Their training journey led to agility and competitions and today, MACH Roula MXB MJB MXF T2B, has earned the AKC agility championship. Read their story:

Ann-Marie had must moved into a new house that would allow her to have a dog when a local listing seeking a foster for a 2-year-old Lab mix caught her eye.

“I thought fostering a dog would be a good way to figure out if my lifestyle could adapt to dog ownership,” she said. “The fostering didn’t last long because after 10 days, I was in love with her. I named her Roula, short for Mavroula (Greek for small, black, feminine), and she moved in with me amongst all my unpacked moving boxes.”

Nothing was known about Roula’s first two years of life other than that she was picked up as a stray. She was healthy and in good shape.

“A mysterious scar on her right shoulder surrounded by a ring of white fur was the only mark on an otherwise jet-black, beautiful dog,” she said.

But her behavior was another story. Ann-Marie quickly realized she needed some professional training assistance.

“Roula liked to chase moving things, including cars and motorcycles.  She lunged at other dogs and was adept at scavenging and knocking over trash cans.  She couldn’t hear a dog bark from a second-story window a half block away without losing her mind.  I knew I needed help, and I got it:  lots of exercise and professional trainers to train me to train her.”

Trainers recommended keeping her busy and giving her a job, like agility. Roula was just over 3 years old when she entered foundation agility class and “things started to change dramatically…Her brain started to work through the puzzles of agility and life.”

Ann-Marie had no intentions of competing, but like many owners who started agility for confidence building, she was talked into entering a competition and, as the cliché’ goes, the rest is history.

“Agility was a catalyst for us.  If class was fun, the wonder of learning how to be a good teammate for Roula in competition while helping her discover and gain confidence in her (and our) abilities was awe inspiring.”

“I couldn’t have asked for a better dog.  I think I’ll keep her,” Ann-Marie said.