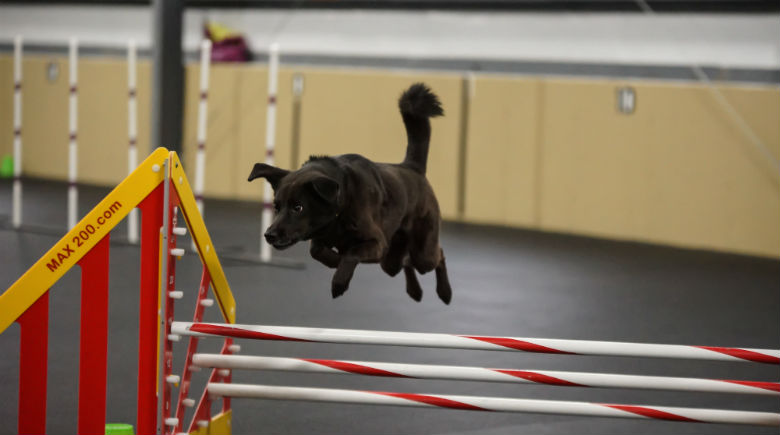 Karen Powell of Frankfort, KY, fostered two littermates eight years ago and never dreamed that both of them would end up living with her permanently and having successful careers in AKC dog sports. Cody recently earned his AKC Preferred Agility Championship (PACH) through the AKC Canine Partners program for all dogs, including mixed-breeds and rescues. Karen tells his story:

Cody and Biggie were 8 week old foster puppies from Owen County Friends of Animals that I took in August 2007.  I named them Big (2.9 pounds) and Small (2.8 pounds) because I didn’t plan on keeping them.

My mother’s friend adopted Small and named him Cody, and I decided to be a foster failure with Big and adopted him.  I took Cody to classes and walks for his owner because she wasn’t able to, and when her husband died in 2010, I took Cody back with me, never expecting to find out that he had such huge talents!

I started halfheartedly training him for rally in 2011, and he surprised me by coming in fourth in his first AKC Rally Novice class and finished off his RN title with a score of 99 (out of a possible perfect score of 100)!  I started training him in agility in fall 2012 and by fall 2013, he had his Excellent level titles.

We continued with agility trials in between rally trials with my AKC Canine Partners dog, Stella, and I decided to start Cody back in rally too.  Long story short, he earned his second AKC Rally Advanced Excellent (RAE2) title on Oct. 3, 2015, at Hamilton County Dog Training Club and his PACH on Oct. 31, 2015, at Queen City Dog Training Club, both in Cincinnati, OH.  He’s since earned his Barn Hunt Association Senior-level title and has one Q in Masters.

He’s a hard worker and wants to please me at every turn.  Living with him is a real joy!