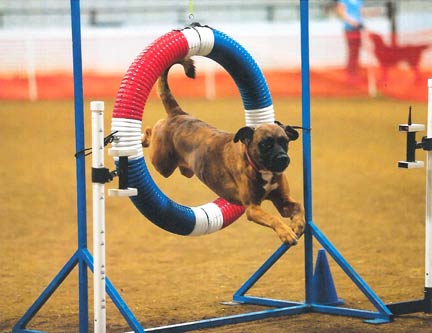 Being that my wife Sandy and I have Boxers as our breed of choice, we were asked by a friend to take in a Boxer dog as a foster. She turned out not to be a boxer, but a boxer-lab mix – a Boxador.

The young girl seeking the temporary foster home was going through a number of issues, including a residence. After about a month, she let us know she was coming to get Layla, but she was going to give her up to the shelter. Having already completely fallen in love with Layla, I said “no way.”

Since I had been under the impression that Layla was not staying with us, it was at this point that I started to work seriously with her. We started with beginning obedience classes, where Layla wanted to be the social butterfly and tried to meet and greet every other dog anywhere in the vicinity. We worked through it, even though some days she nearly pulled my arms out of the sockets in the process.

Having taken Boxers to advanced levels of agility, I had the same goal for Layla. Agility training was long and arduous.

Once we started competing, Layla decided to show off by running on top of a tunnel instead of going through it. Slowly we progressed through the levels of AKC Agility: Novice, Open “purgatory,” Excellent and finally Masters. Through it all, exhibitors would comment about how happy Layla is when she is doing agility.

We continued to progress. Even though most times I’m positive Layla was asking for a better handler, we finally achieved Master Agility Championship on May 17, 2015, at the Hamilton Dog Training Club trial. We are very proud of what she has accomplished.