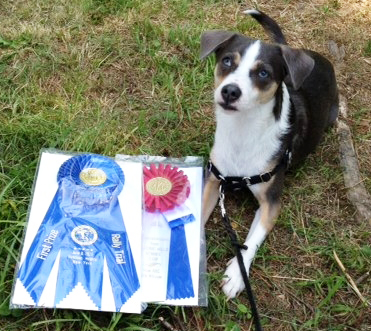 Dog trainer Brian Burton rescued Sammy and recognized his extreme intelligence which has been channeled into amazing performances in AKC Rally. Enjoy this video of one of Sammy’s perfect score AKC Rally trials:

It was nearly Christmas 2009 when the New York City Animal Control picked up the terrier mix wandering the streets.

Officers took him to the city shelter in Harlem, where no one claimed the little dog. When dog trainers Brian Burton and Sarah Fraser received a call from rescue, asking for help, they agreed to take the dog for a limited amount of time.

It was not long before “Sammy” had a permanent home with Brian and Sarah.

“Sammy had a great, spunky personality but was also dog reactive to all dogs he met in the city,” Brian said.

This trait would make him difficult to adopt, and the couple could not stand the thought of such a promising dog possibly being euthanized so they adopted Sammy.

“Since both my wife and I are full-time trainers, we decided to keep Sammy and make him a part of our family along with Buster, our rescued pitbull mix, and two rescue kitties.”

Brian and Sarah own Instinct Dog Behavior and Training in New York City, where they teach classes to the public, but also work with several rescue groups to help promote adoptions and keep adopted dogs in their new homes. They are also successful obedience and rally competitors who have earned titles, including the Obedience title of Companion Dog (CD) on Buster.

The couple realized they had a very smart pupil in Sammy, who quickly learned exercises and responded to their work to reduce his stress level around other dogs.

Fast forward five-and-a-half years and Sammy now holds AKC’s highest honor in Rally – the Rally Advanced Excellent RAE) title, which he achieved with five perfect scores of 100 along the way. In addition, Sammy has earned the AKC Obedience title of Companion Dog (CD) and the AKC Canine Good Citizen award. He recently repeated his Rally feat and now has added another RAE to his formal name: Sammy RAE2 CD CGC. In addition, Sammy has qualified for and competed at the past two AKC Rally National Championships.

“Sammy is now comfortable with all dogs and helps socialize puppies and nervous dogs for us,” Brian said. “We are really proud of Sammy and all he has accomplished,” Brian said.

Sammy competes in AKC Rally and Obedience through the AKC Canine Partners program for all dogs, including rescues and mixed-breeds: /dog-owners/canine-partners/enroll/