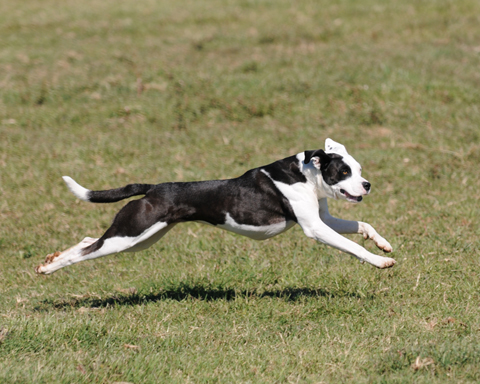 Daisy was an emaciated stray found wandering in a busy street before she was rescued and then adopted by the Medendorp family.

“Daisy only weighed 13 pounds, had mange and was full of parasites,” Billie said. “With good food and care, Daisy is now 40 pounds and perfectly healthy.”

Billie is a long-time dog sport competitor who has shown Dalmatians and Great Danes. She quickly realized that Daisy was extremely smart and needed a job.

Daisy now excels at flyball, agility, obedience and rally, but her favorite sport, by far, is coursing.

In addition, she also has earned the highest honor in AKC Rally – the Rally Advanced Excellent (RAE) title – twice. She qualified for the 2015 AKC Rally National Championship, made the finals, and placed sixth in the RAE class.

Not bad for a former street dog, Billie says!

Daisy competes in AKC sports through the AKC Canine Partners program for all dogs, including mixed-breeds and rescues. For more information, look here.