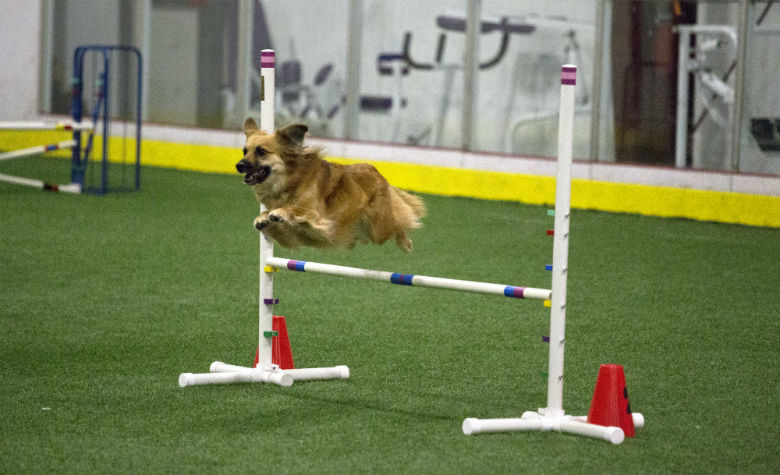 Hayley was a stray wandering through southwestern Virginia when she landed in a shelter with limited space and was scheduled for euthanasia. Homeless Animals Rescue Team (HART) pulled her out in the nick of time in the summer of 2010, and Bettina Markowitz of Sterling, VA, met her at an adoption event in 2011 and took her home. Hayley had many fears, but with love and training, Hayley has overcome her insecurities and recently earned her AKC Master Agility Championship (MACH) as a member of the AKC Canine Partners program. Her formal name is now MACH Hayley the Crunch MXB MJB OF. Bettina shares their story:

Hayley was adopted from HART  in 2011.  I volunteer with HART on the cat side, and when I was ready to add a dog back into my life, two years after losing my last dog, I went to a HART dog adoption event. She was being returned that day by the man who had adopted her a year prior because his new girlfriend was allergic.

She was super sweet and good natured, though, she had NO training and was not cat friendly (I have three cats). But she learned really fast. She was quite fearful, and training helped her start to overcome that.

I always wanted to do agility since first seeing it on television about 10 years ago. I fortunately found A Click Above training school not too far from me and signed Hayley up to try it out, in hopes it would build her confidence. We had our first class in March 2012. Clearly, we both loved it! We started competing in August 2013. She has overcome a lot and people are often surprised to hear about how afraid she was of everything when I got her. (She even had a hard time walking by a trash bag on the curb at one point in time.)

Hayley loves learning new things and performing tricks. She loves her cat friends and all the humans that love on her at trials. She’s easy to live with and travel with. She is a fast learner with a huge desire to please. She is just the most perfect dog. I have no idea how I got SO lucky!