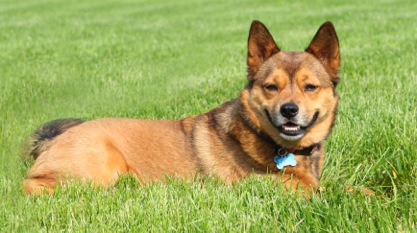 Moroughan’s Roxy CDX BN RAE CGC, owned by Vicki Moroughan of Hurlock, MD, did her best to attract a new owner by standing on her hind legs and grinning at people who walked through the shelter. It worked as Vicki could not stop thinking about her and adopted her. Together, the two learned about the fun sport of AKC Rally and now have achieved the AKC’s top title in Rally – the Rally Advanced Excellent (RAE) title. Vicki tells their story:

My husband and I adopted Roxy from a local animal rescue in August 2012; about five months after they brought her north from a high kill shelter. We had dropped off some dog supplies at the animal rescue.  While leaving the facility, we walked through the kennel area.

As we approached Roxy’s kennel, she displayed her exuberant personality. She was standing on her hind legs with her back up against the front corner with what appeared to be a smile on her face, a move that made it hard for us to forget.  Over dinner we talked about Roxy and how sadly the rescue was filled to capacity. I called that night and asked if there was any interest in her. Hearing that there was not, we turned in an application and picked her up the following week.

After passing the CGC test, we started rally classes in the spring 2013. Being a newbie to any type of dog competition, I had never heard of rally. Carol demonstrated a few signs to our class. I love learning new things, and rally looked like a lot of fun.

Our first AKC Rally Novice competition was in November 2013 at a five-day cluster. Roxy earned her Rally Novice (RN) title and qualified for the 2014 AKC Rally National Championship in Harrisburg, PA.  We competed and placed 10th at the national event.

She earned her Rally Advanced Excellent title on May 27, 2016, at the Oriole Dog Training Club’s trial. She earned seven High Combined honors out of the nine trials that offered the award on her way to RAE. I feel I still have a lot to learn, but realize the relationship built with Roxy is very special. I have met some amazing people and forged wonderful friendships along the way.

We could not have the success without Carol. She is a top exhibitor and an excellent instructor. She is very knowledgeable about dog behavior and how to get the best out of each individual dog. Carol is also generous with her knowledge even to those who are not her students. On multiple occasions, I have seen her at shows offering help to an exhibitor struggling with an issue. At every class, I feel fortunate to have the opportunity to train under her at the Canine Development Center in Cordova, MD.