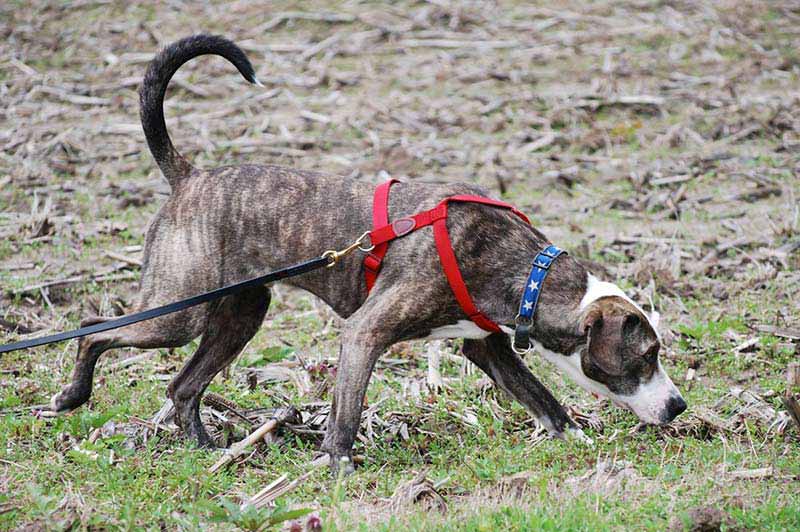 Chris Moore and her family were content with owning two small dogs until a crime stripped their security away.

The family returned home one day to discover a theft had taken place. Their home had been broken into, but thankfully, their Miniature Dachshunds, Mocha and Maggie, had not been harmed or stolen.

“We were so grateful that they were OK, but they also didn’t give us that feeling of protection that we had always felt from having our big guy Lucky loose in the house,” Chris said.

Lucky was a lab-shepherd mix who had passed away a year earlier at age 14. The Moore family had adopted him from their local shelter. Even though Lucky was a friendly dog, the family knew his presence was enough to make intruders think twice about entering their Greenfield, IN, residence.

The experience with the break-in sent the family back to the shelters “looking for another big dog to join our family.”

What they found was Oliver – a big-boned bully breed mix puppy. He had been part of a large litter that was turned into the Indianapolis Humane Society shelter.

“We were walking up and down the aisles, and my husband Jerry spotted Oliver first and called my daughter Cassidy and I over to look at him. Cassidy had said to me on the car ride over that she wanted a boy dog and she wanted to name him Oliver,” Chris said. “So as soon as she saw him, she said he looked like an Oliver. We petted him for a little bit… and then home with us he came.”

Today, Oliver is nearly 6 years old and is not only helping the Moore family feel safe in their home. He is a certified Search and Rescue (SAR) dog with American Mantrailing Academy, and serves with Indiana K-9 Search and Recovery, helping the community in many ways, from tracking lost people to serving in times of disaster.

Chris previously had competed in AKC sports with her Dachshund, Maggie, who earned advanced level Agility, Obedience and AKC Rally® titles. So naturally, she enrolled Oliver in the AKC Canine Partners program, for mixed-breeds and rescues, and then put him right into classes with the goal of teaching him basic manners and eventually competing in Agility and Obedience.

“We knew nothing about his history or breeding, but because he was a bully mix I knew it was more important than ever that he be well socialized and well trained.”

After puppy class and basic obedience, Oliver went on to Competition Obedience class. It was there that Chris met a member of Indiana K9 Search & Recovery, who spotted potential talent in Oliver.

“He approached me about coming to their try-outs,” she said. Oliver “auditioned” and did so well that he was accepted into the group’s rigorous training program. He has been trained to find lost people and was cross-trained in cadaver searches.

In addition, the team appears at numerous public awareness events and visits schools to educate children about the important role of SAR dogs.

“Oliver loves to go to schools and visit kids,” she said. “Oliver thinks life is all about the Oliver party, and he is sure everyone comes to meet him. He has never met a stranger!”

In addition, Oliver has competed in agility and earned his AKC Novice Agility titles. They also take an occasional obedience class, but the search and rescue work now has taken precedence as a way to help others who are impacted by emergencies.

“I felt so violated and afraid after our home was robbed, and Oliver took all those fears away…He is very protective of our family and our home, and I always feel safe with him,” she said. “Oliver was somebody’s trash, but he is our treasure.”

For more information on enrolling your dog in the AKC Canine Partners community and enjoying AKC events and programs: /dog-owners/canine-partners/

For more information on search and rescue, visit the American Mantrailing Academy site: