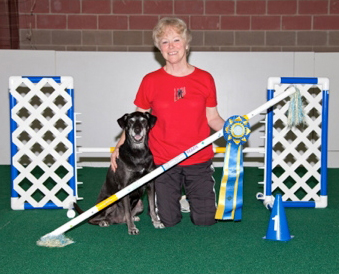 Reggie was one of 10 puppies left in a box by a burned-out trailer and was lucky enough to be adopted by Lee.

“I chose her because of her white back feet.  I wanted an agility dog and, knowing nothing, got lucky by choosing one that happened to have an affinity for the sport,” Lee said.

“By the time AKC started Canine Partners (in 2010), we were accomplished enough to breeze through Novice and Open.  Our start in Excellent was a little unsuccessful, like our first runs, but Reggie was always very willing and always so happy to run.  This helped my confidence and we soon began to qualify on a regular basis.”

“Reggie’s whole body wiggles when she wags her tail, which feels like an iron rod when it bangs against your leg,” Lee said. “She is a very loving and affectionate dog, and…she totally changed my life for the better.”

For information on getting your dog involved in AKC Agility: /events/agility/