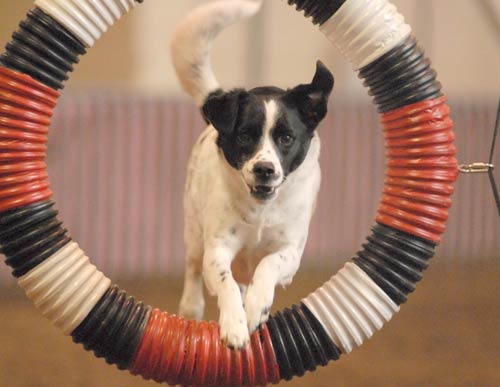 Kipp and Judith adopted each other after Kipp was shuffled through multiple shelters and foster homes.

Like many rescue dogs, Kipp had fear and abandonment issues, while Judith, like many first-time dog owners, faced a rocky learning curve.  Following a trainer’s suggestion that agility might develop a more trusting relationship, the pair enthusiastically leapt in, having now earned both the AKC Preferred Agility Championship and the AKC Master Agility  Championship.

Judith, clueless about Kipp’s breeding, affectionately calls her “Guttersnipe” after the Eliza Doolittle character in “My Fair Lady.”

Judith proclaims, “While we’re not the fastest or the flashiest, we’re absolutely partners for life, both in and out of the ring!”

Kipp competes in AKC Agility through the AKC Canine Partners program for all dogs, including rescues and mixed-breeds.