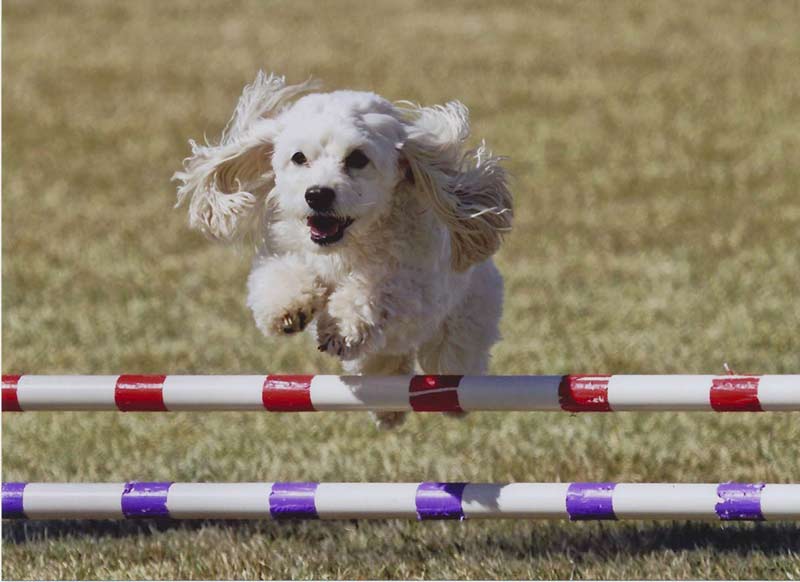 Jennifer Clemons of Las Vegas, NV, shared this story of how her first dog, Maddy, led her to dog training classes and then agility competitions. Today, Maddy is MACH Madeline of Pine Banks  MXB  MXS T2B2 OF – a recipient of the AKC’s top honor in Agility – the Master Agilty Championship (MACH). Maddy competes through the AKC Canine Partners program for all dogs, including mixed-breeds.

Maddy came into my life after I had moved to Las Vegas in June 2006 and was studying for the BAR exam to practice as a lawyer.  I didn’t know anyone in Las Vegas and decided now would be as good time as any time to get a puppy.

She was 12 weeks old and she was my first dog.  During study breaks and after work, I would take her to the dog park and quickly realized that despite her small size she had a LOT of energy. She loved getting the other dogs to chase her and she’d zoom around and weave past dogs changing direction at a dime with a huge smile on her face.

I had seen agility on TV but I had never trained a dog before.  Eventually, I got up the courage to enter a beginner’s agility class when Maddy was three and a half years old. Maddy caught on quickly and loved it.

It took me a bit longer to figure out the handling aspect of the sport and dog training in general, but Maddy was very forgiving as I learned about handling styles and techniques.  My goal has always been to keep it positive for her which has helped us come together as a team.  She gets rewarded all the time for my mistakes and if she makes mistakes I know it’s because I haven’t proofed something enough or my criteria is not clear.

I started competing with Maddy a year after we started training and despite the limited number of AKC trials in our area, she moved into the advanced level Excellent and Master’s classes fairly quickly.  Initially, Maddy was known for her crazy “zoomies” around course, but she was having so much fun running around with a huge smile on her face that myself, judges, and spectators couldn’t help but smile and laugh.  What is agility if the dogs aren’t having fun?! To this day at age 9, she occasionally still gets the zoomies on course.

Two years ago I started to get more serious about competing so Maddy and I began traveling to Southern California to compete more often.  Before I knew it, Maddy was in striking distance of getting a MACH, something I had never dreamed of when we started training.  On Aug. 14, 2015, Maddy got her last “double Q” at the Keeshond Club of Southern California/Papillion Club of Southern California in Fountain Valley, CA, and earned her MACH – a feat made even more special because I was running her at 8 months pregnant with my first child!

I feel very lucky to have found such a special dog who introduced me to agility and ignited my passion for the sport.