Enjoy This Great Video of Murray’s Road to MACH! 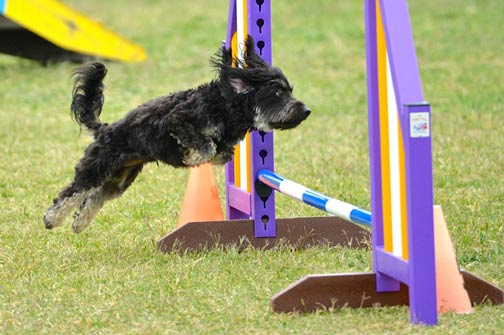 We know you will enjoy this wonderful video of rescue dog Murray’s Road to the AKC Master Agility Championship!

Tamar and Jon adopted Murray in March 2011 from LA Harbor Shelter. He had already been adopted out and returned multiple times and they were his sixth home.

“The rescue thought he was a Havanese or mix thereof, but he definitely has a lot of Dachshund in him so we joke that he’s a Havaweenie,” Tamar said.  “He liked to jump a lot, and so friends casually recommended agility and we signed up for a beginner class, not even realizing that there was a speed component (or any other criteria other than climbing on stuff while looking adorable).”

“We quickly got hooked on the sport, but thought we would never compete because he was afraid of people, which made it difficult to get a height measurement and to be in the ring with people. Thanks to a lot of friends and show-n-go’s and our brave obedience instructor (who took him for measuring), we got our height card and entered our first AKC Agility Trial in May 2013.”

Affectionately known in the Southern California agility community as “The Murr,” Murray earned his MACH on Aug. 23, 2014, at the Orange Coast Rhodesian Ridgeback Club trial in Camarillo, CA.

For more information on getting started in the fun sport of AKC Agility: /events/agility/