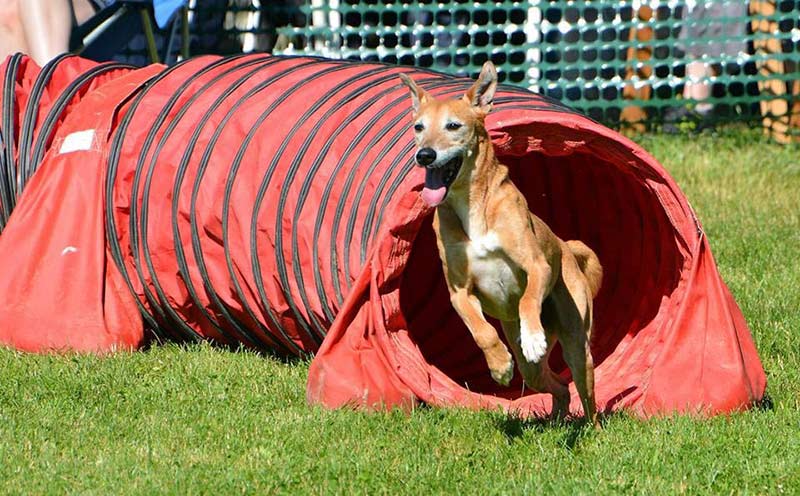 Kink is a 12 ½ year old mixed-breed dog who was adopted at the age of 2 years from the island of St. Kitts in the West Indies.

He did not start his agility career until the age of 9 due to Allison’s education path and frequent moves around the country.

But Kink loved the sport and soon was competing in AKC Agility through the AKC Canine Partners program for all dogs, including mixed-breeds and rescues.

“Kink was not the fastest dog on the course but was steady, qualifying more often than not,” Allison said.

In November 2014 as Kink closed in on his Master Agility Championship (MACH), disaster struck.

“He unfortunately ruptured a disk in his back. After a few months off, plus acupuncture, physical therapy, and medications, the neurologist cleared him to run one more time before surgery to remove the ruptured disk,” Allison said. “It was decided that no matter the outcome of the trial, this would be Kink’s retirement.” Kink was entered in his last trials on May 16-17, 2015, at the Dog Obedience Training Club of Rochester, NY.

Although slower than previously, Kink still qualified in both classes Saturday and in the Standard class on Sunday morning. This left only the Jumpers with Weaves class on Sunday with him needing two final speed points for the MACH.

“On the last run of his career Kink qualified with the two points to earn his MACH. There was not a dry eye in the house. The next week Kink had a successful surgery to remove the ruptured disk and now is enjoying retirement pain free. “