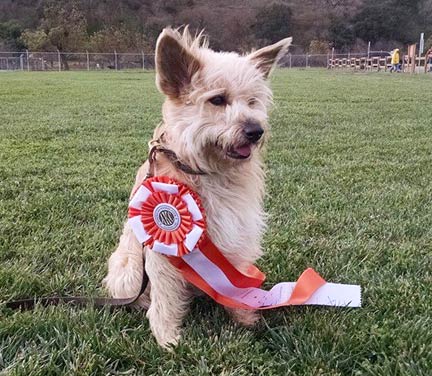 “She is a dog meat trade survivor and was on a large flatbed truck with 350 other dogs stuffed into tiny cages, bound for Vietnam,” Jackie said. “The truck was confiscated by police at the Thailand/Mekong River border, and all the dogs were brought to a government animal compound in Northeast Thailand.”

“A Soi Dog volunteer made the 10 hour bus ride to photograph all the dogs at the compound and then later posted them on the Soi Dog Facebook page. That is how I discovered June,” she said.

June was sent to the United States where she went home with Jackie and started in a training program to help build her confidence. June now excels in a wide variety of dog sports, including coursing ability, weight pull, and barn hunt.

“Without a doubt, coursing is June’s favorite activity, and her pure joy in running in an open field chasing the lure is obvious even after the run, when she insists upon running the long course again,” Jackie said.

For information on joining the AKC Canine Partners community for all dogs, including mixed-breeds and rescues: /dog-owners/canine-partners/

For more information on the AKC Coursing Ability tests and to find a test in your area: /events/coursing-ability-test/